As I wrap up my Jones 305 blog posts, which originated when I recently found several photos in my EKU digital archive that didn't seem relevant at the time, I was reminded of all of the people who came and went in my life during the nine plus years that I was there. It also reminds me of something that my father told me a long time ago. He described life as a book with many chapters. As one chapter closes another chapter is ready to be written. On Friday afternoon, January 23, 2004, I walked out of Jones 305 for the last time as Eastern's University Photographer, and ironically, on Monday morning, January 26th, I was right back on campus doing my first assignment as an independent freelancer, covering a electrical outage on campus for the Lexington Herald-Leader. To put things in perspective...had I stayed at Eastern I could've retired with my 27 years this past December. But I have no doubt that I made the right decision. I may never get to retire, but I'll sure have fun doing it. 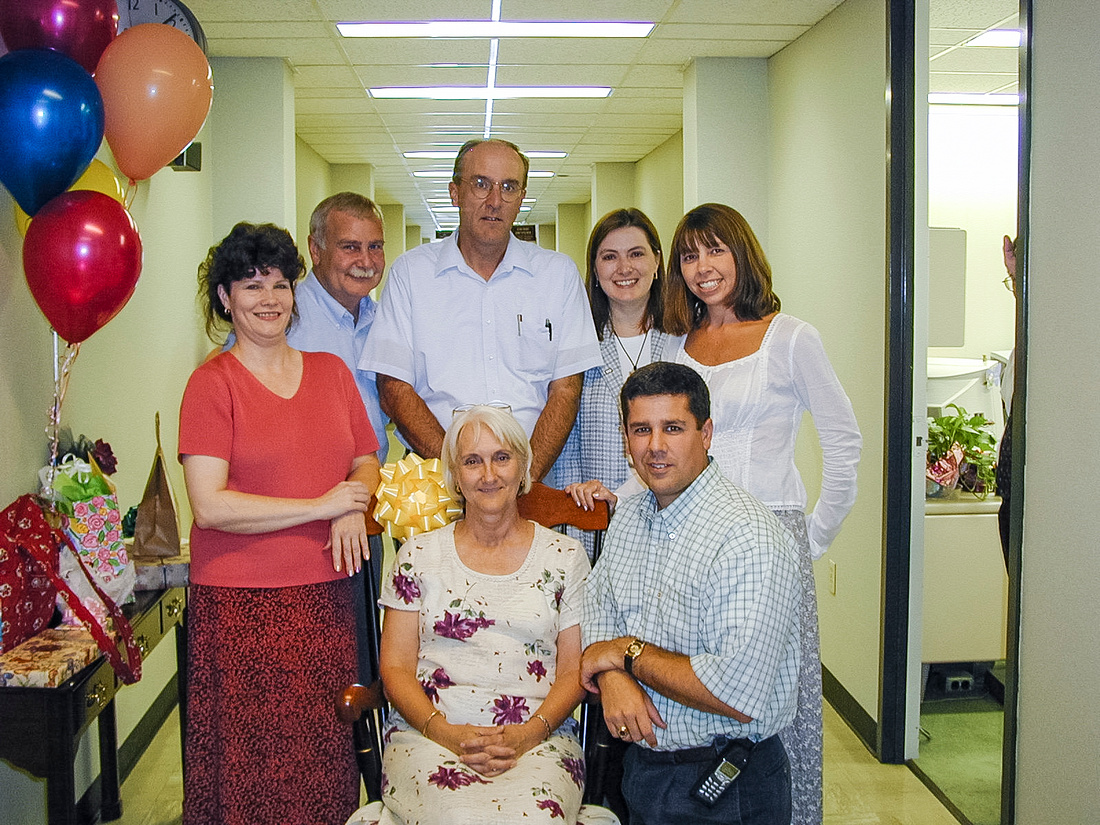 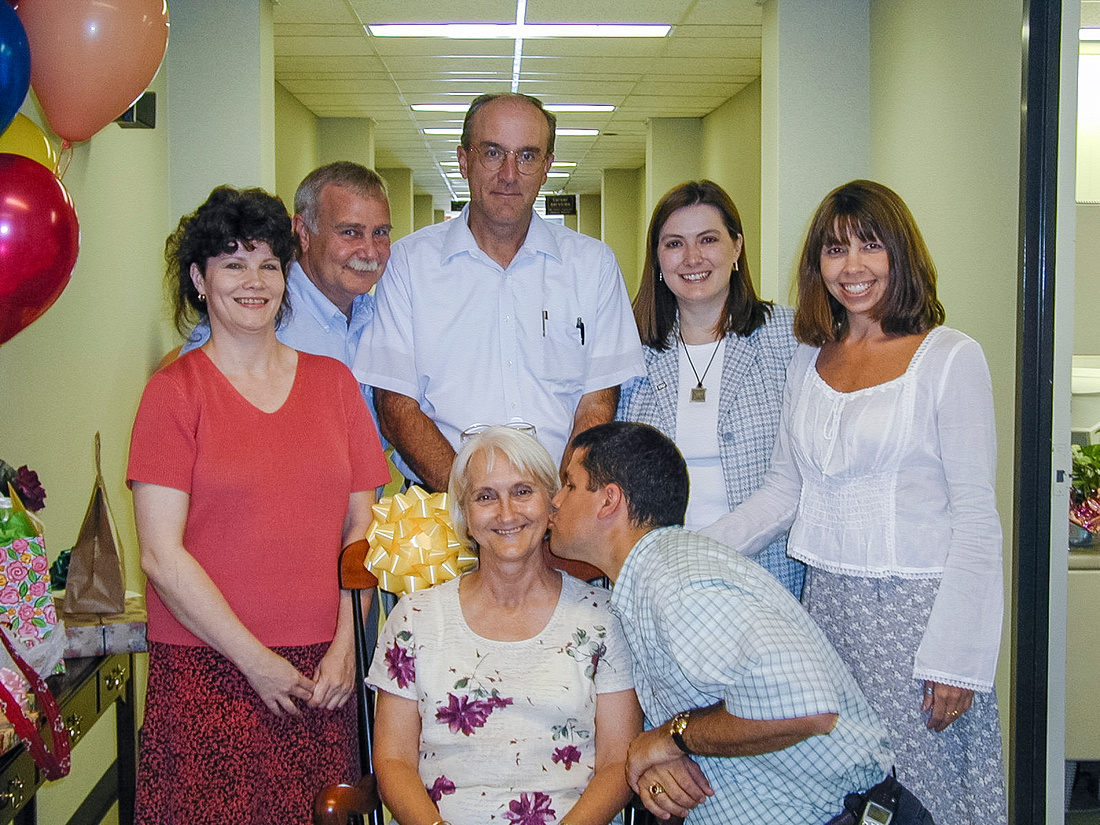 Joetta Tipton, seen here at her retirement party in 2003, was the administrative assistant and the glue that held our office together. I owe her a great deal of thanks because she was the one who introduced Natalie and I to her granddaughter's baby sitter when Natalie was pregnant with our oldest son Nolan in 1997. We made one phone call and that was it. Daycare was never an issue with us. The same baby sitter and her husband achieved grandparent status in our family by keeping all three of our kids over a period of 11 years. 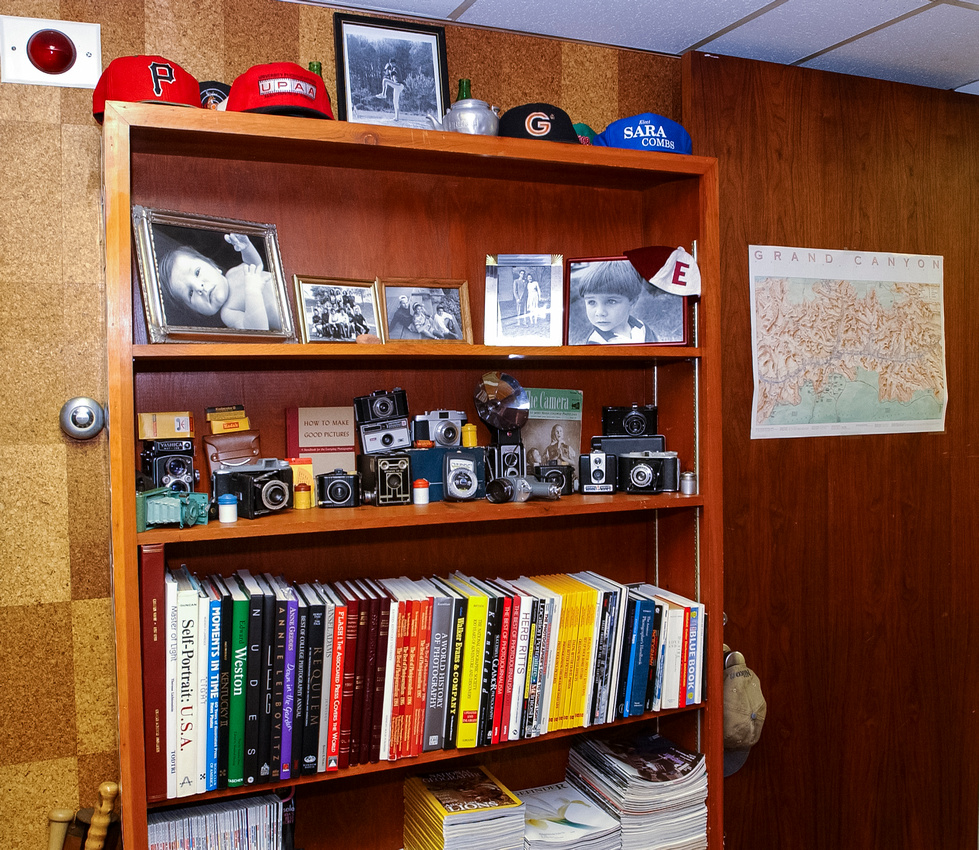 It was during my time at Eastern that I started collecting photography books and old cameras. I became like the Statue of Liberty for old cameras because people would show up in my office with old cameras to give me. 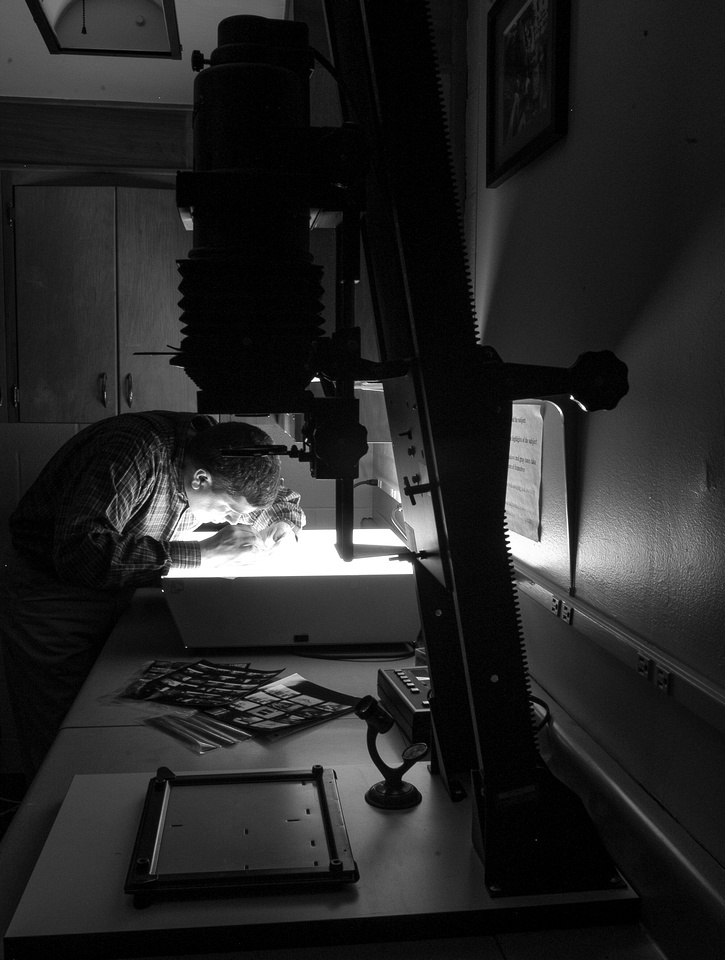 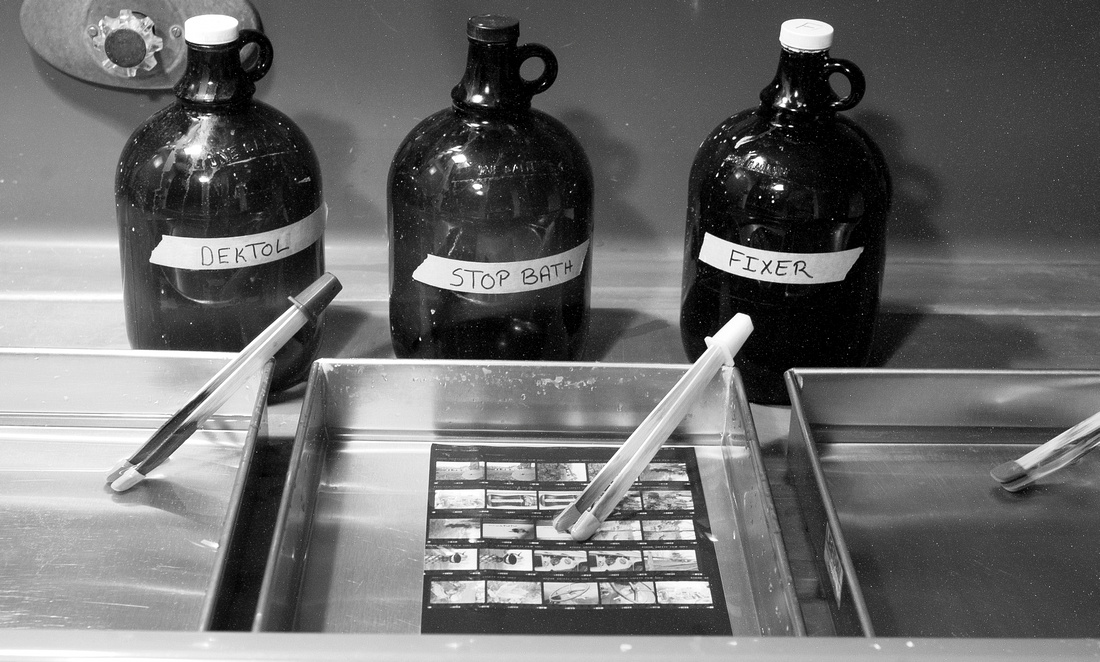 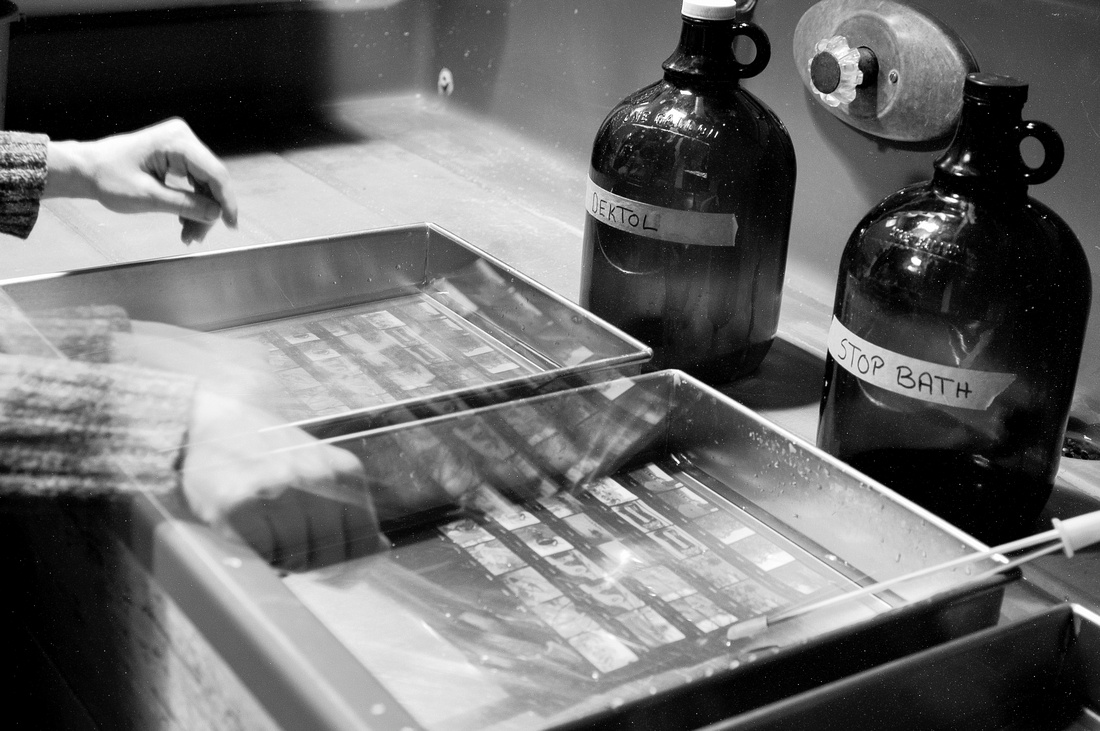 Hiding out in my ultra-cool darkroom that Kodak designed when the building was constructed in 1969 was the highlight of my days. It's so funny that darkrooms and the chemical process are now back in vogue. But, I've been there done that. Time to move on. I'm satisfied to be an old man using Lightroom. 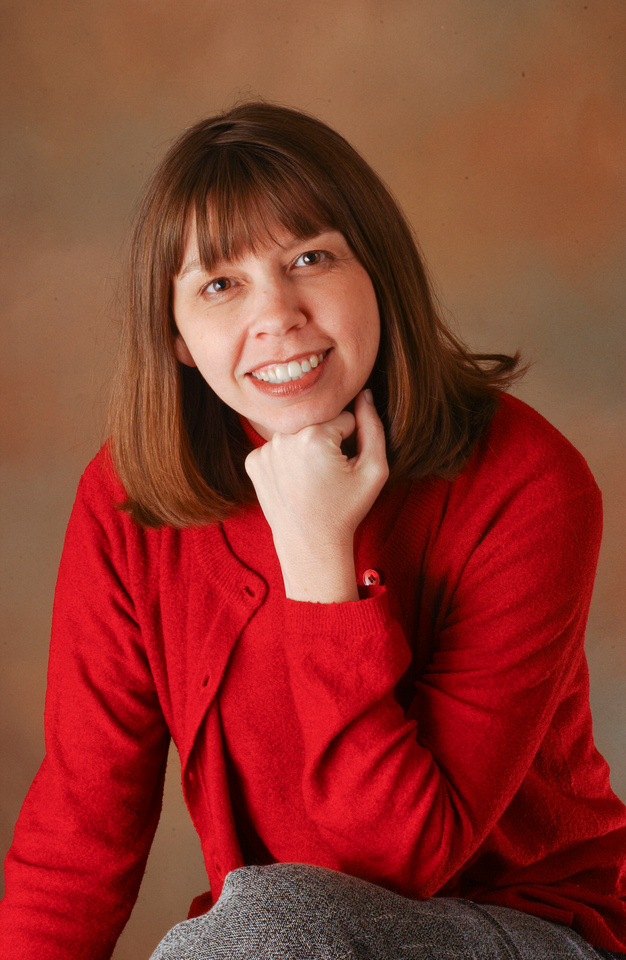 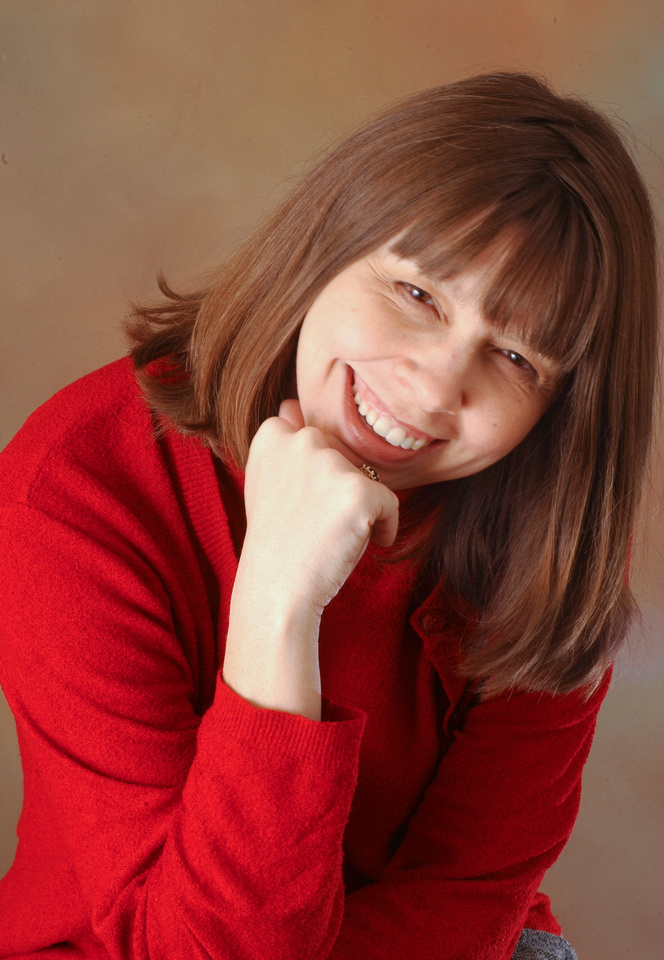 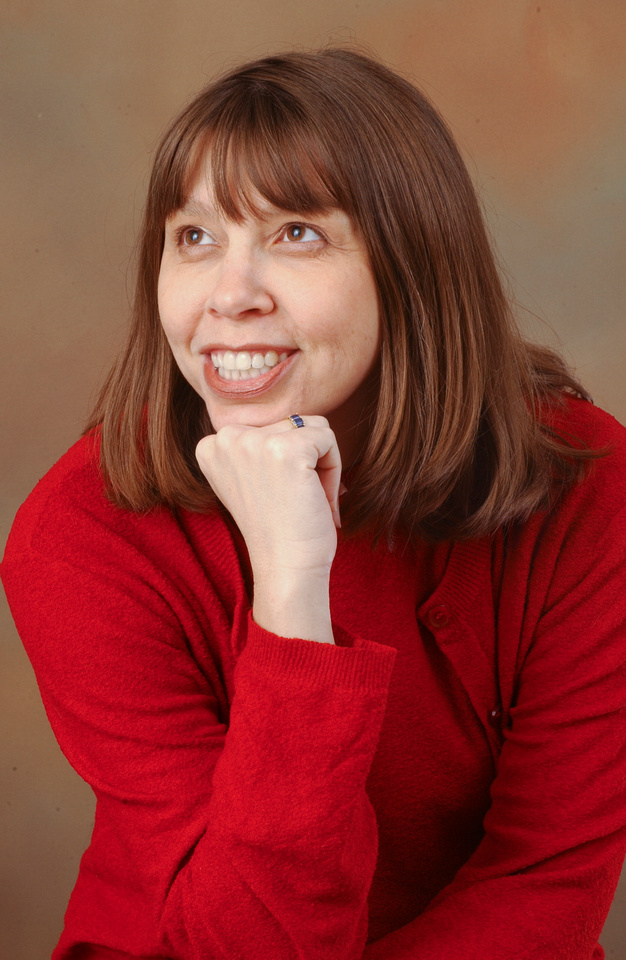 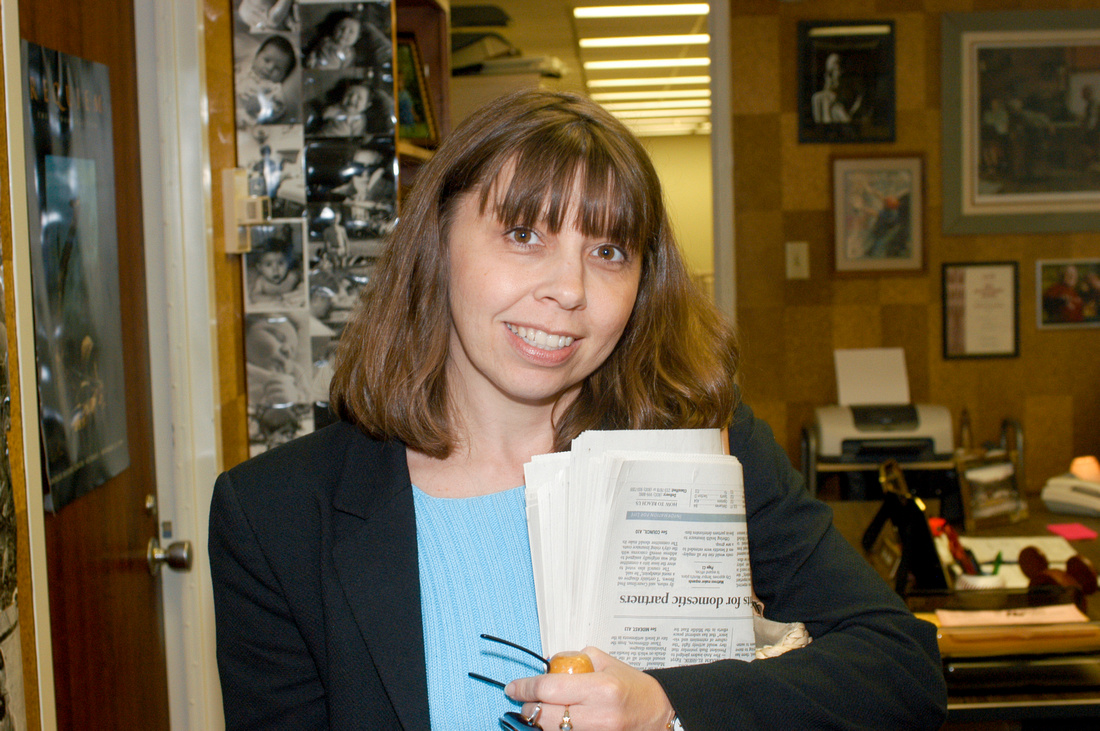 Karen Lynn joined our staff in September of 2000, and quickly became one of my best friends. I always said that Karen was like the Cal Ripken Jr. of our office because she could do just about anything. She was so versatile. She could write, do photography, and graphic design. I used to joke and say that all you had to do was give Karen a roll of aluminum foil and the internet and she could build you a rocket ship the moon. 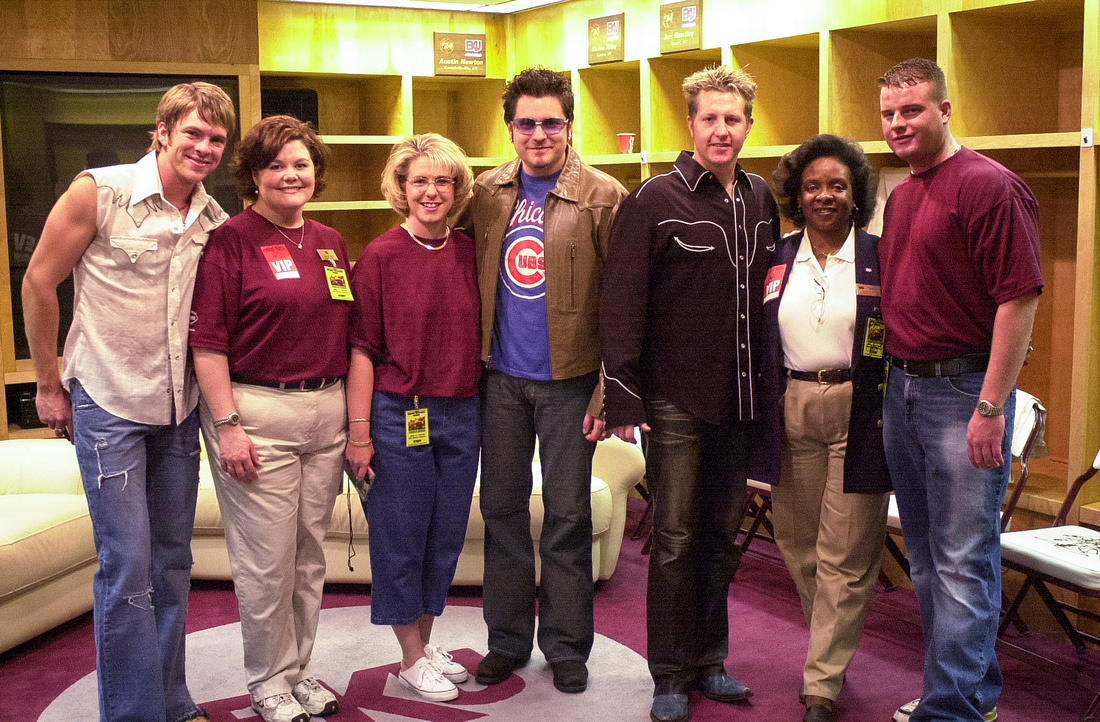 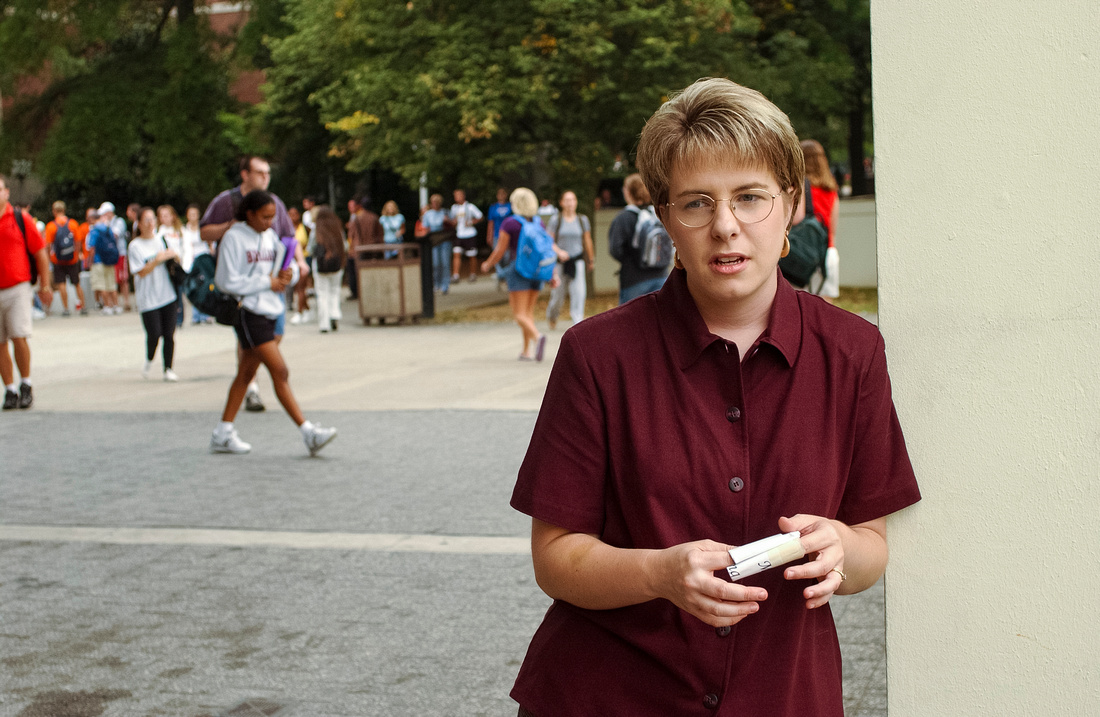 Shortly after Natalie graduated Morehead State in 1995 she hired on at Eastern at the ripe old age of 21, which worked out really well because we had the same work schedule and holidays. She eventually moved over to the student life office and was over student organizations and programed all the fun stuff for New Student Days. Above, she is seen in her office in the Powell Building in August 2001, and with the band Rascal Flatts who was on campus for a concert in April 2002, leaning on a column at the Powell Building during New Student Days in August 2001.

Below, Natalie and I both worked on the day of the 9-11 attacks. The University cancelled classes that morning as a show of respect, but also so that students and faculty could watch it as it all unfolded on the news. They put several large screen TVs in the student center of the Powell Building so that the university community could come together, and they fed them pizza as we all watched the news, trying to process what was going on. Although all we were doing was taking photos and serving pizza, she and I both understood that we were witnessing history as 9-11 was the Pearl Harbor and the JFK of our generation. 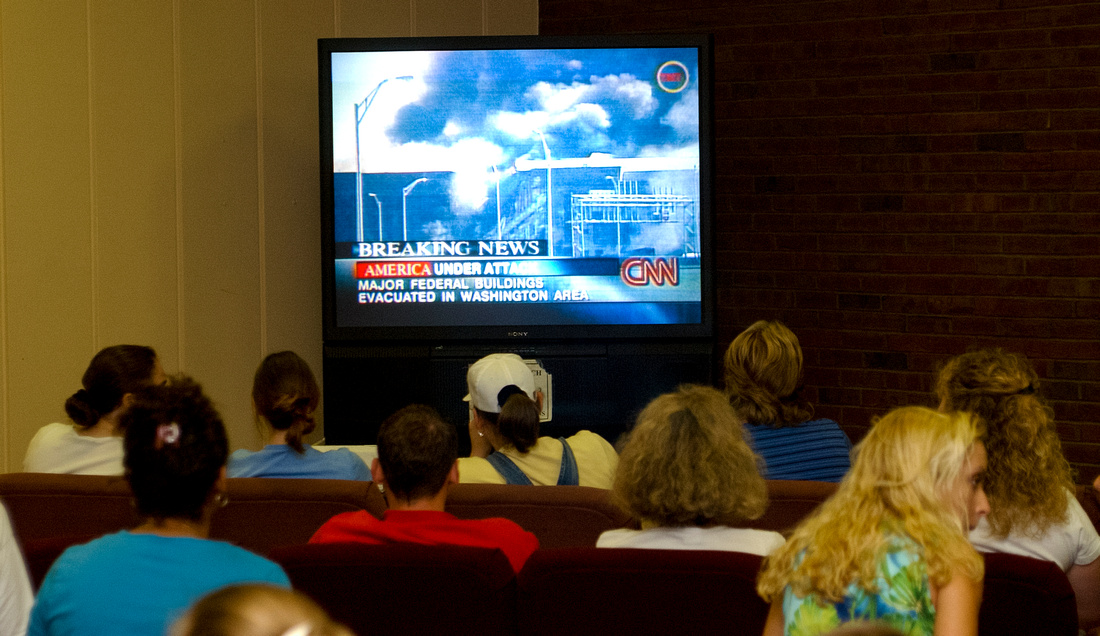 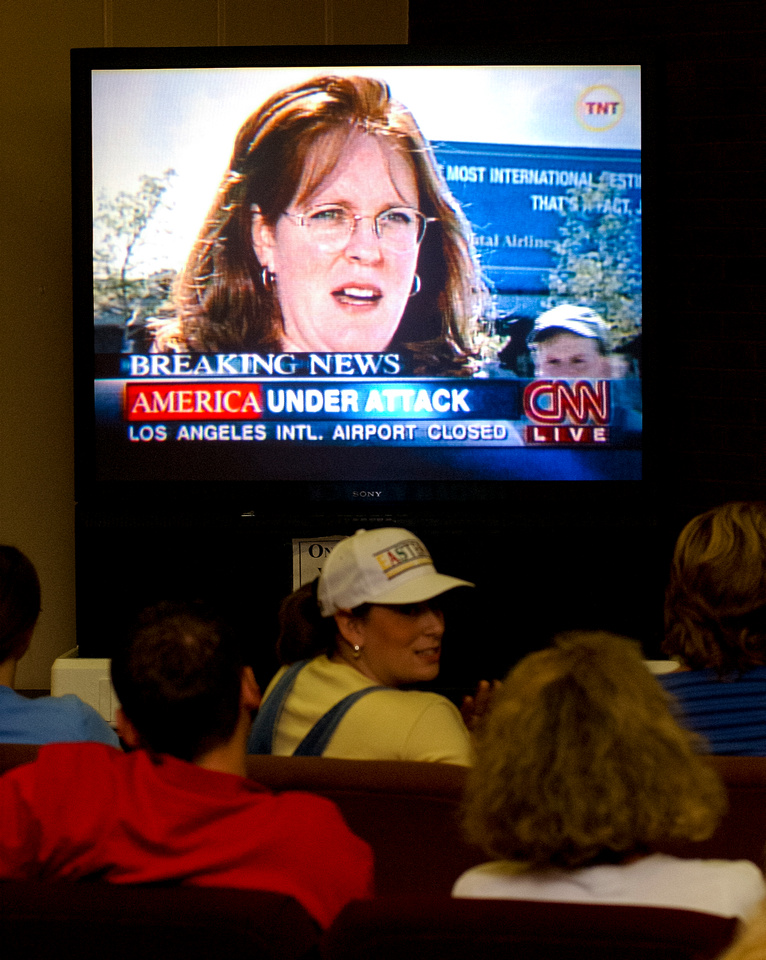 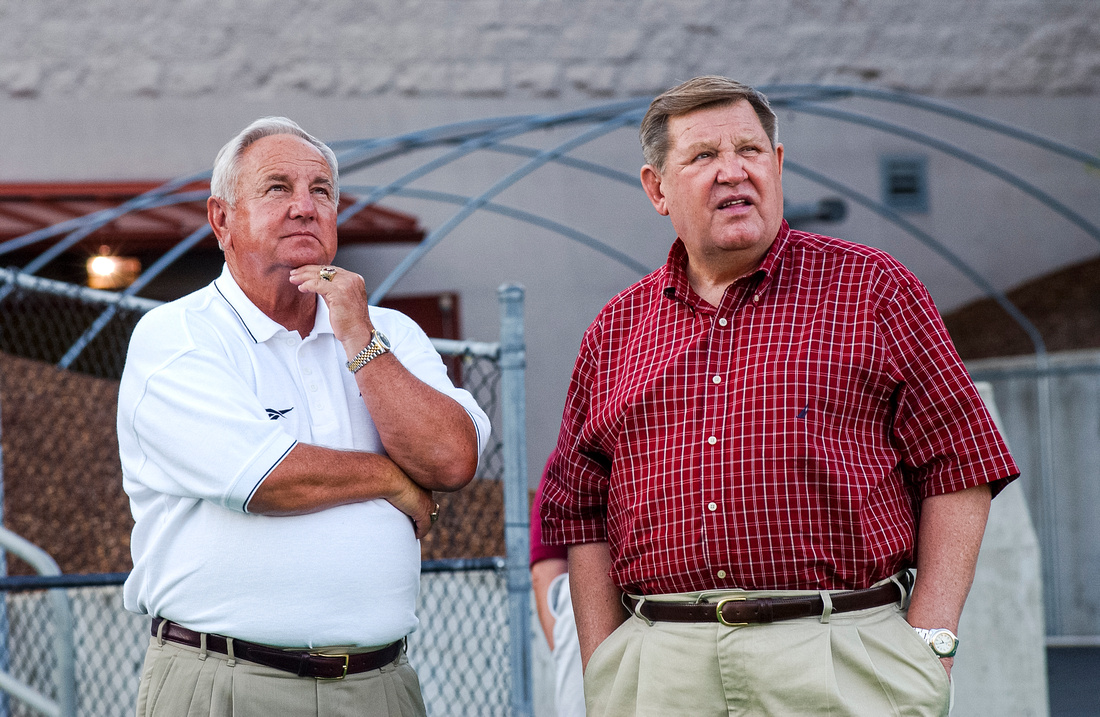 If you've ever seen the movie WE ARE MARSHALL then you're looking at the real life Jack Lingyel, right, who was played by Matthew McConaughey. Lingyel came out of retirement in 2001 to serve as Eastern's athletic director, which coincided with coach Roy Kidd's 300th victory and retirement. The two are seen here at the Oregon State game August 2002, Corvallis, Oregon.
. 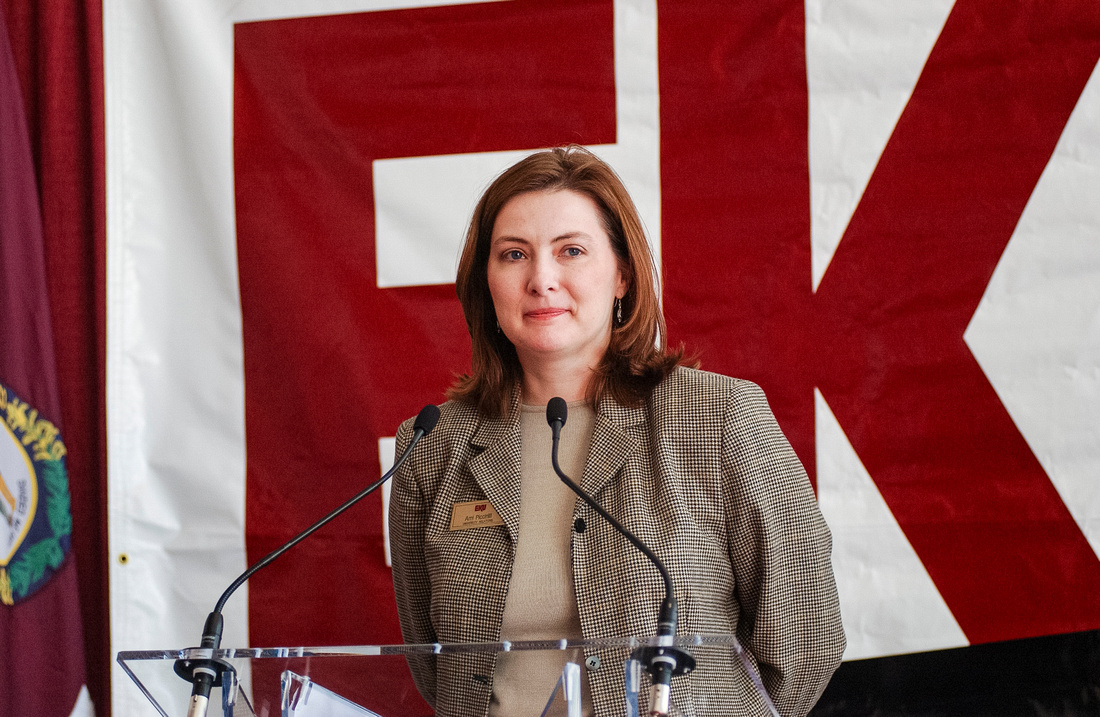 Ami Piccirrilli was my last director at Eastern. I really didn't get a chance to work with Ami all that long before leaving, but it's funny how so many things come full circle. I hadn't talked to Ami much since 2003, other than on Facebook. But then, when I went out of business at the height of the Covid pandemic in March of 2020, it was Ami, who is now working in marketing at UK Healthcare, who called me out of the blue in April, and gave me my first assignment, post-Covid, when I needed it most. Ami unknowingly, literally helped resurrect my business from the ashes of unemployment.

I now photograph all of her provider portraits for the pharmacy division of the UK Chandler Medical Center. She always brings her laptop to work on stuff when we have photo shoots, but we usually sit around as we wait on people to show up and shoot the bull, and she doesn't get much work done. But...life is short. Why answer emails when you can catch up on things (just don't tell UK). It goes to show, don't ever write anyone off in your life, you never know when they'll be there to lend a helping hand. 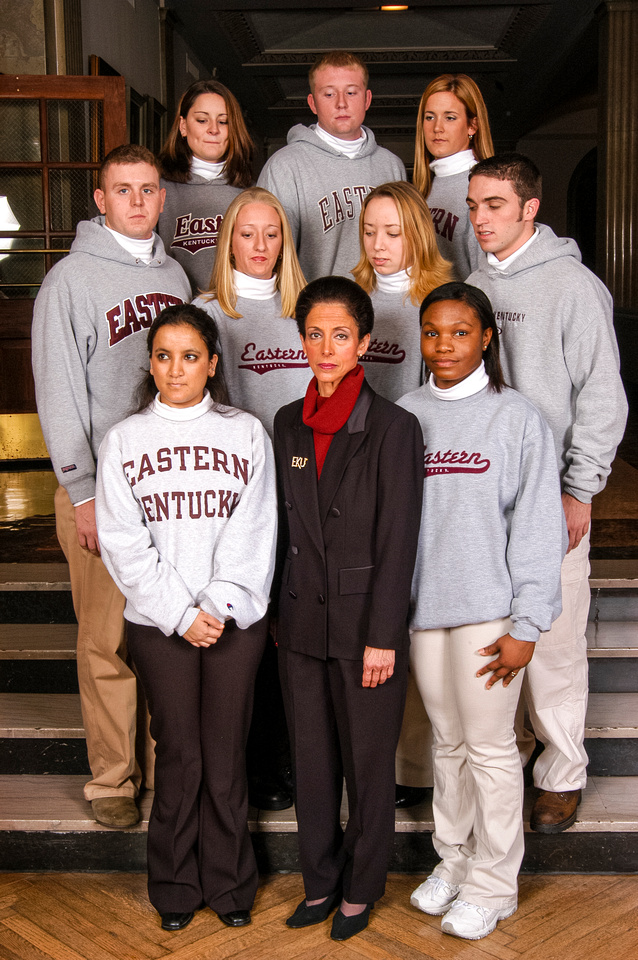 I've really debated on whether I would show this photo and talk about the life-altering story behind it. I'm a man of faith and I don't like throwing anyone under the bus, and I'm a big believer that we're all a "work-in-progress" in God's eyes. But, ultimately, this one photo, and this one singular moment in time, changed my life forever. I appreciate history for the sake of history, regardless of whether it's good or bad, because it'll always be history.

At precisely 5:36 P.M. on November 18, 2003, the wrath of EKU President Joann Glasser caught up with me. And it was at that exact moment, that I knew with absolute certainty that my time at Eastern Kentucky University was over. A lot of good people had left Eastern because of Joann Glasser, and in the blink of an eye I joined that illustrious crowd. I waited until the next morning to resign, but I knew, even with three young children at home, that I would go work at Walmart if I had to, but either way, I was moving on with my career. It turned out that I was able to stay on a couple of more months, because I didn't want to be unemployed at Christmas, and I really wanted to make sure my wonder-student Chris Radcliffe, who graduated in December 2003, would get my job. And he did. Once again, the rest is history! 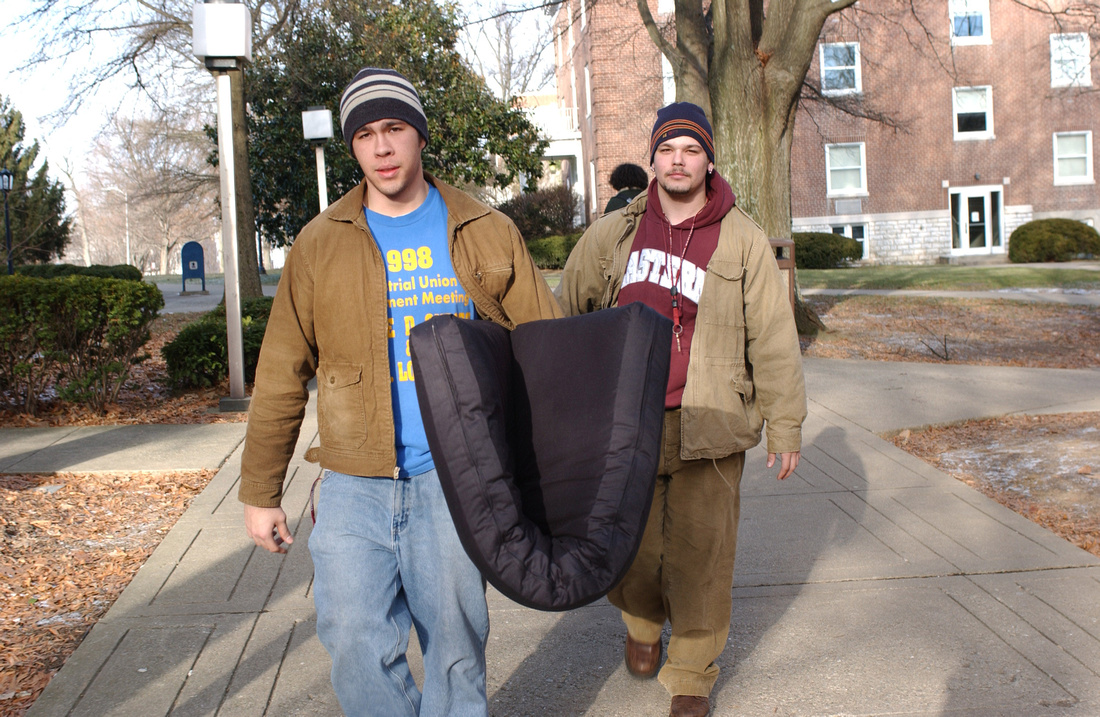 Zach Ingram of Elizabethtown, left, and Nick Herrin of Fairfield, Ohio, right, move a mattress from Case Hall to Martin Hall after the power went out in Case Hall. 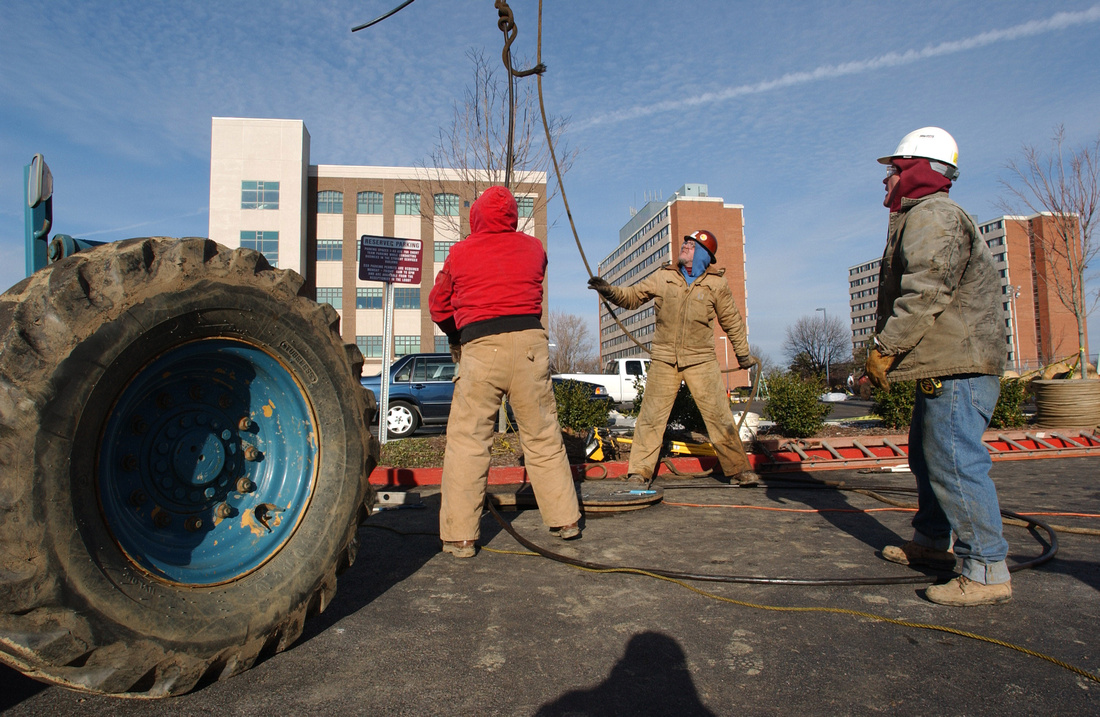 Like the old saying goes...the more things change the more they stay the same. My first official job as a freelancer with Tim Webb Photography was to go back on campus and photograph a major electrical outage for the Lexington Herald-Leader, that forced the University to put kids up in local motels during cold temperatures. 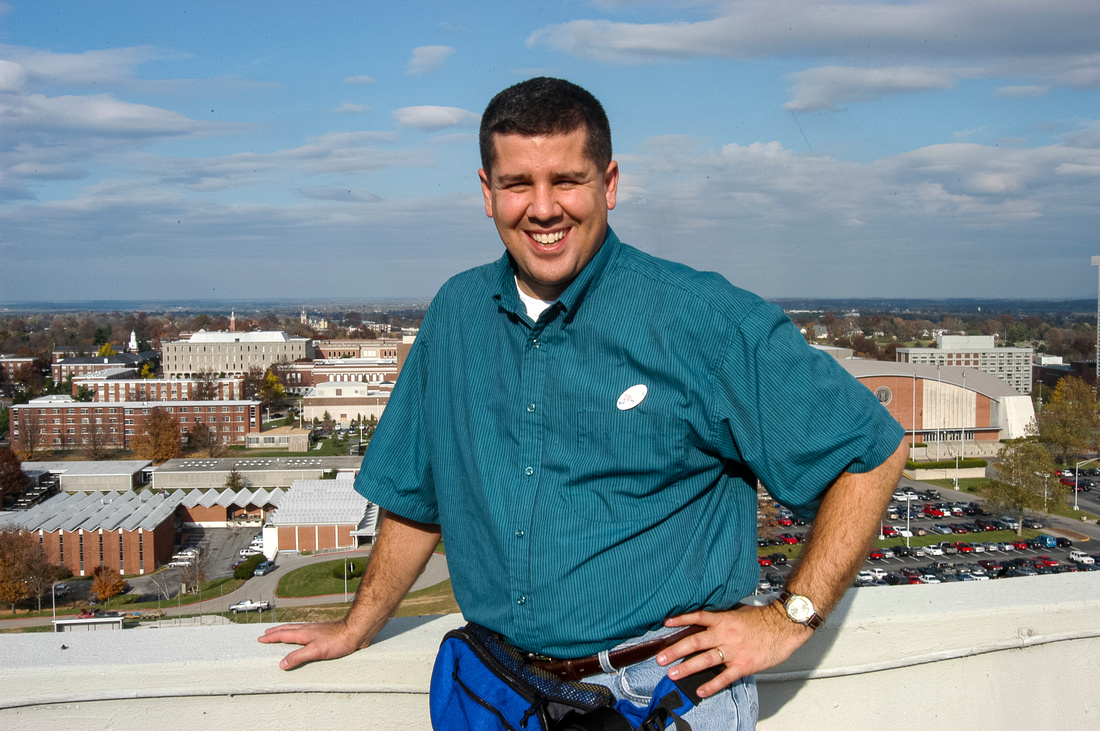 I want to end this post in a positive light. Working at EKU was the greatest thing that ever happened to my professional career. It brought me back to my alma mater and to Richmond, where I have lived for over 26 years. I love this photo because the building behind my right elbow was the Donovan Annex Building, which was the building where I earned my journalism degree. And the building directly behind it, near the edge of the photo is the Donovan Building that houses Model Laboratory School, where all three of my kids attended pre-k through 12.

By the time my daughter Laura started pre-k in 2007 they had moved her classroom into the old Eastern Progress office. Her little backpack locker was about 10 feet from where my photo cabinet was when I was Photo Editor my senior year in the Fall of 1991. Literally, her educational career began in the same spot where mine ended. Things really do come full circle if you wait long enough.