As I continue adding to my Jones 305 blog posts, #2 will highlight my student photographers.

My very first student was a young lady from Hindman, Kentucky named Shannon Ratliff. I owe Shannon a great deal of gratitude because when she started working with me in early 1995, I had no clue what I was doing, and was working way above my pay grade. But we made a good team and we were patient with each other as we figured things out.

My next student was a fine arts student named Richard Garland. I just thought I was a bonafide Pink Floyd fan until I met Richard. He was a very worthy music fan and a good photographer. Richard came back to EKU and now works for the library. It was also funny how one student would lead to other students. Richard introduced me to Hannah Trustee, who replaced him and worked with me for a while. Hannah completed a really nice photo essay on Eastern Kentucky that went toward her thesis while working for me.

Every now and then you get to experience a defining moment in your life, the type of moment that creates shock waves for decades to come. One day in 1996, a very confident ginger named Brenda Ahearn walked into my office and proudly declared, "I have my Daddy's camera equipment and I want to be a photographer!" I was having a bad day and thought... "Sure you do!" I told her that my two paid positions were currently taken. She quickly informed me that she would be happy to volunteer. And she did. She had the most incredible work ethic that I had ever seen. I usually showed up to work around 8:20 each morning and Brenda had already been there for an hour, filing negatives or whatever needed to be done. Brenda was a rare breed who never questioned anything that I asked her to do. She would knock you down to answer the phone on the first ring because she said her father always told her it was good business to answer the phone on the first ring. It didn't take long for my two paid positions to weed themselves out, which opened up their spots for Brenda. And as they say, the rest is history, because Brenda overcame many obstacles in pursuit of her dream of becoming a photographer. She graduated in 1998 and went on to a phenomenal career in photography. Life has come full circle for Brenda. Her first job was the University Photographer at Northern Arizona University in Flagstaff. Then she worked for several newspapers all across the country, and is now once again a university photographer at the University of Michigan in Ann Arbor.

I finally learned that the best photographers were the ones who sought me out. The ones that I recruited never seemed to work out. I took it as a God-thing and would just let the Good Lord send people to me. Somewhere around 2001 or 2002, a kid from Mount Sterling emailed me saying he was leaving Western Kentucky University's photojournalism program to come to Eastern, which was unheard of. He said he felt like he was just a number at Western. I told him how myself, along with Mark Cornelison and Rob Carr had come out of Eastern and succeeded when Eastern truly didn't have a photo program to speak of. But, I told him Eastern would give him one thing and that was opportunity. Opportunity to be a Big Fish in a very small pond. Me, Corn, and Carr were all examples of what hard work and perseverance could do for you at a place like Eastern. Kevin took my advice, transferred, and worked for me, The Eastern Progress and the Lexington Herald-Leader. Kevin took some criticism for leaving Western, but he proved his critics wrong by going on to get a masters in photojournalism from Ohio University, served on the board of the National Press Photographers Association, and eventually worked at newspapers in Boston, Augusta, Baton Rouge, San Antonio, Knoxville, The Associated Press, and is currently freezing to death as the Visuals Editor at the Minneapolis Star-Tribune, where he was recently named the national visuals editor of the year.

I wish I had thought to take a picture of my student photographer Luke Ramsey on the morning of September 11, 2001, as we sat in my office editing photos while watching the events of 911 take place on a little black and white TV that I kept in my office. Whenever Luke and I see each other today, we both talk about how seeing each other reminds the other one of that Tuesday morning, and watching the second plane hit the South Tower on that little fuzzy black and white television.

Much like with Brenda years earlier, I had another life-altering moment while shooting homecoming portraits on October 1, 2001. My wife Natalie had already told me about a guy named Chris Radcliffe who worked for her at the Information Desk in the Powell Building. She said, "He is a real sweetie and if I could bottle him up and save him for a daughter someday, I would. He's also really interested in photography." As I was sitting in Conference Room C of the Powell Building that evening, bored out of my mind, waiting for homecoming contestants to trickle in for their portrait, I kept noticing this guy walking by really slow, checking out my studio lights. After his third pass-by I told him to come and talk to me. Once again, the rest is history! Chris was my longest tenured student, and he eventually got the University Photographer's position when I left in early 2004. Ironically, I had the job nine years and two months, and Chris was in the job nine years and five months. Just like with Brenda, I'm proud that I was able to give him a start, but he has since then blazed his own trail, having become a lighting guru and what I would consider an expert in Lightroom. After leaving Eastern, Chris has created a very successful freelance business that has literally taken him around the world.

Finally, my last student photographer who was there to help me turn out the lights on my last day was a guy named Chuck Vance. Chuck was the second student who influenced my music tastes when he unknowingly introduced me to a little indie band called Guster. Most people have never heard of Guster but they made a huge impact on me when I reached mid-life and was looking for something new to listen to. Chuck now goes by Charlie and is a CEO in northern Kentucky.

I was blessed to have some great talent to work with in my nine years at Eastern, and I like to think that I had a positive impact on them as well. Or at least I hope I did. 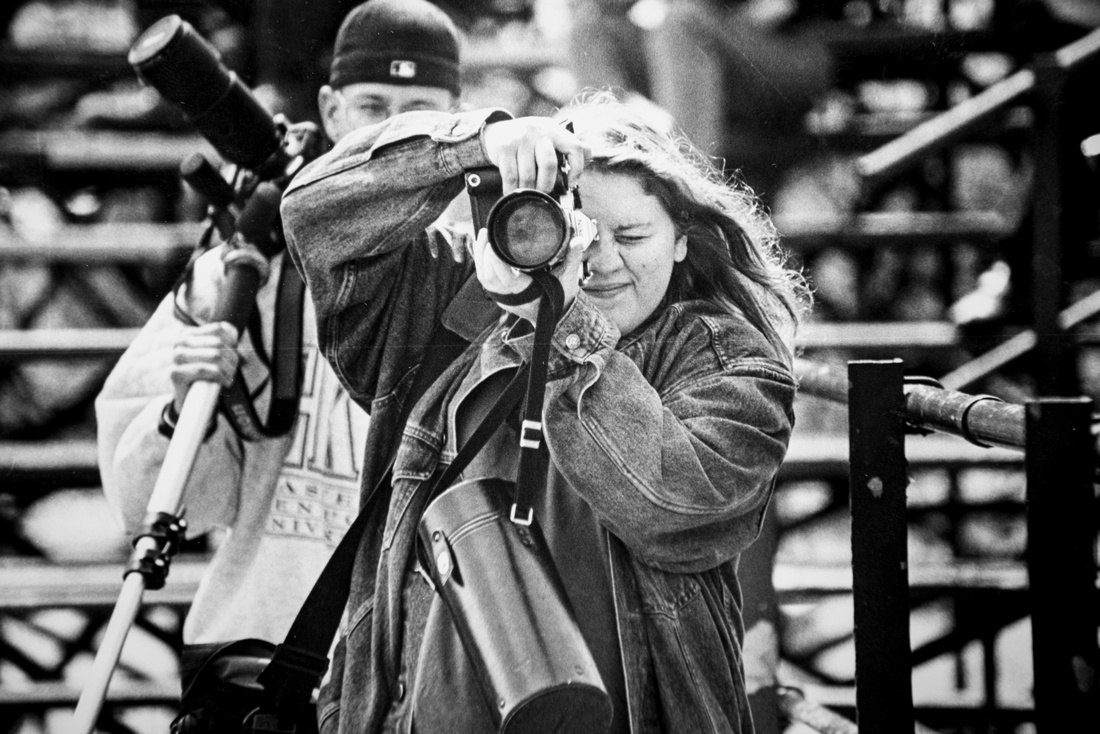 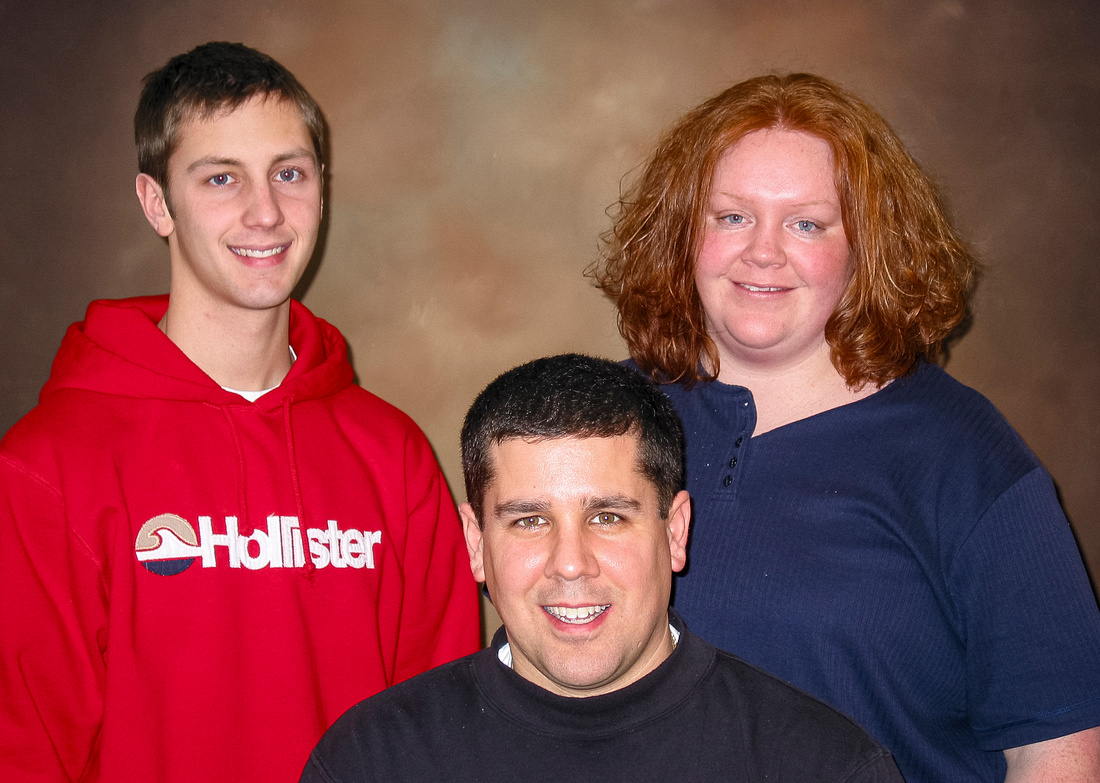 I did a portrait with Chris and Brenda in the studio in February 2003, when Brenda came back to Kentucky for her mother's funeral. 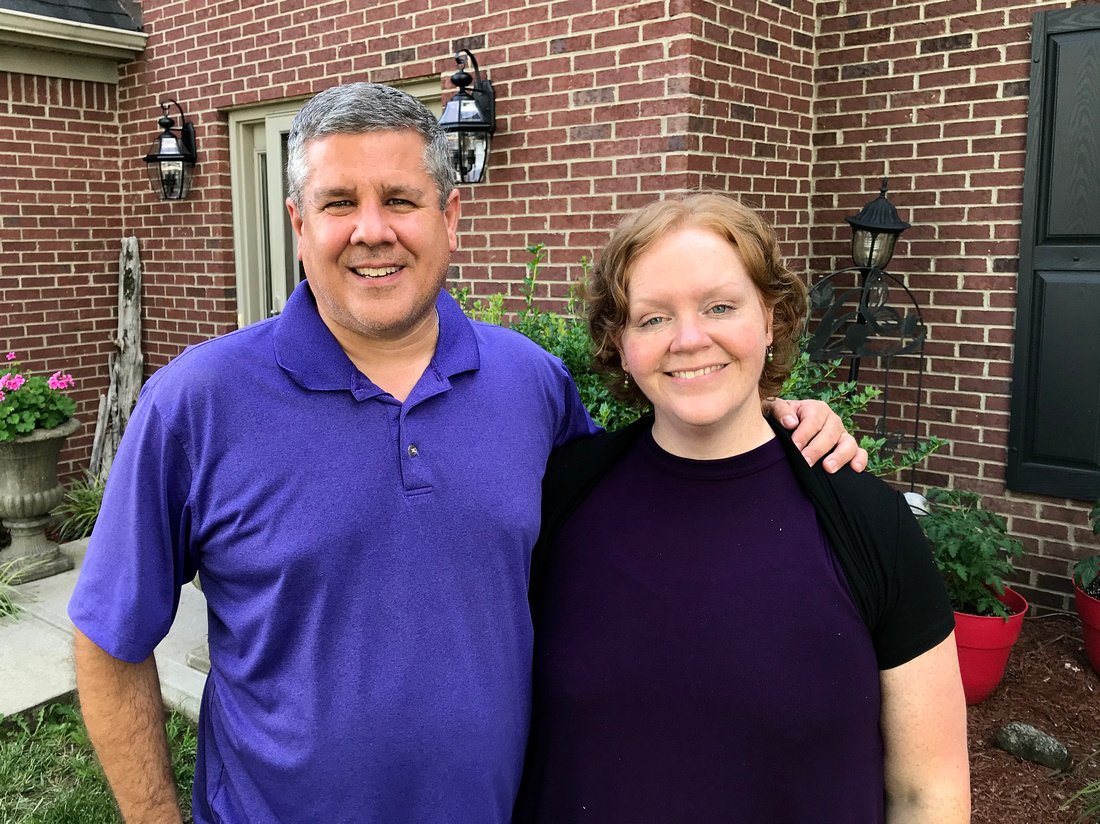 Brenda and I, Summer 2018. She always comes to see me when she's back in Kentucky. I'm proud to have always been her mentor, her impromptu father at times, and always a trusted friend. I don't talk to her often, but when we do talk we never hang up the phone without saying "I love You!" It's just that kind of enduring friendship! She still calls me "Boss Man" to this day. 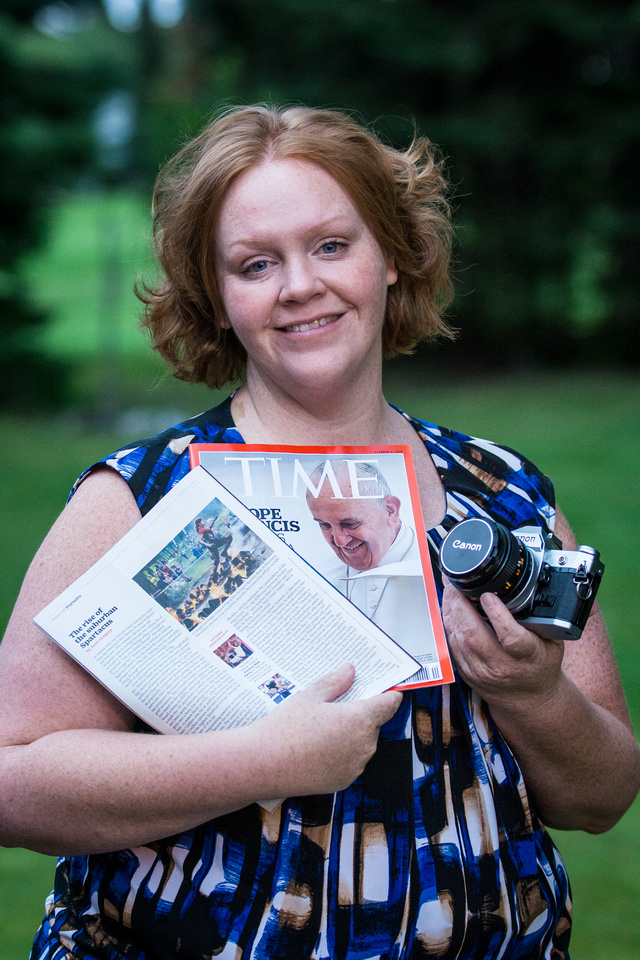 Brenda holds her Dad's original Canon camera that brought her into my office in 1996, along with a
copy of Time Magazine from 2016 with one of her photos inside. 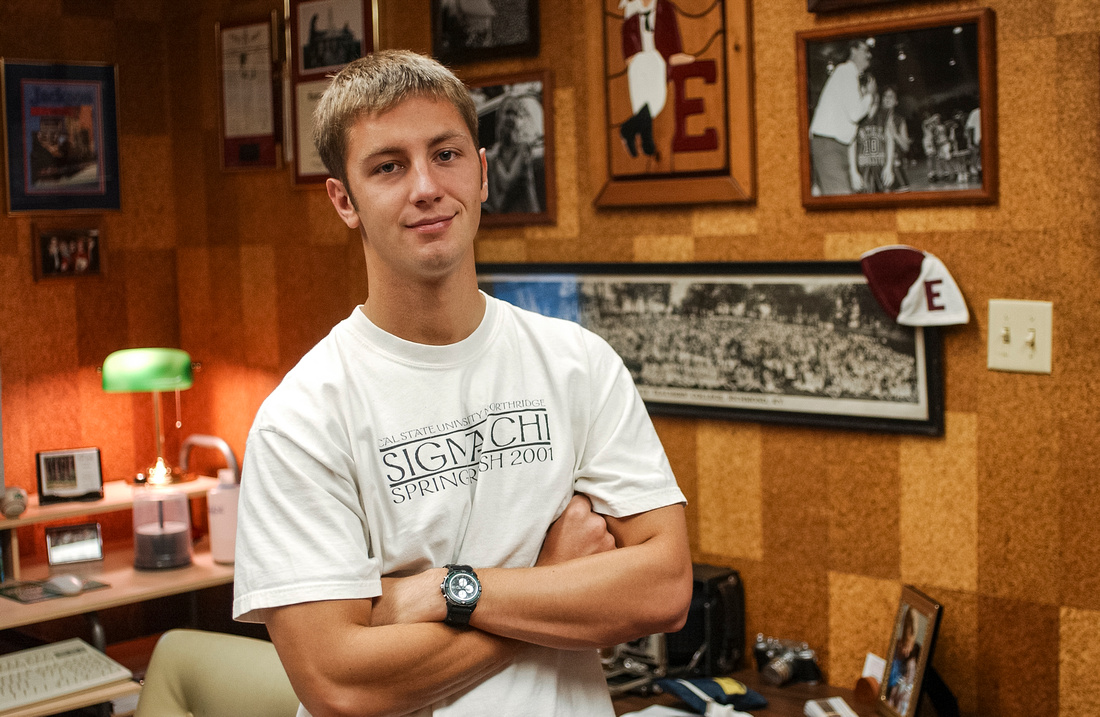 Chris Radcliffe was Sigma Chi president while he worked for me, and now my son Cameron is the current Sigma Chi president. I love how things come full-circle. The great thing about having students come and go like a revolving door was they kept me young, not only in how they dressed but also with music. Chris introduced me to the music of Ben Folds. Our running joke is I used to make fun of the shoes that he wore, only to turn around and buy the same shoes a year later. In many ways, Chris was ahead of his time...well, maybe he was just ahead of my time. 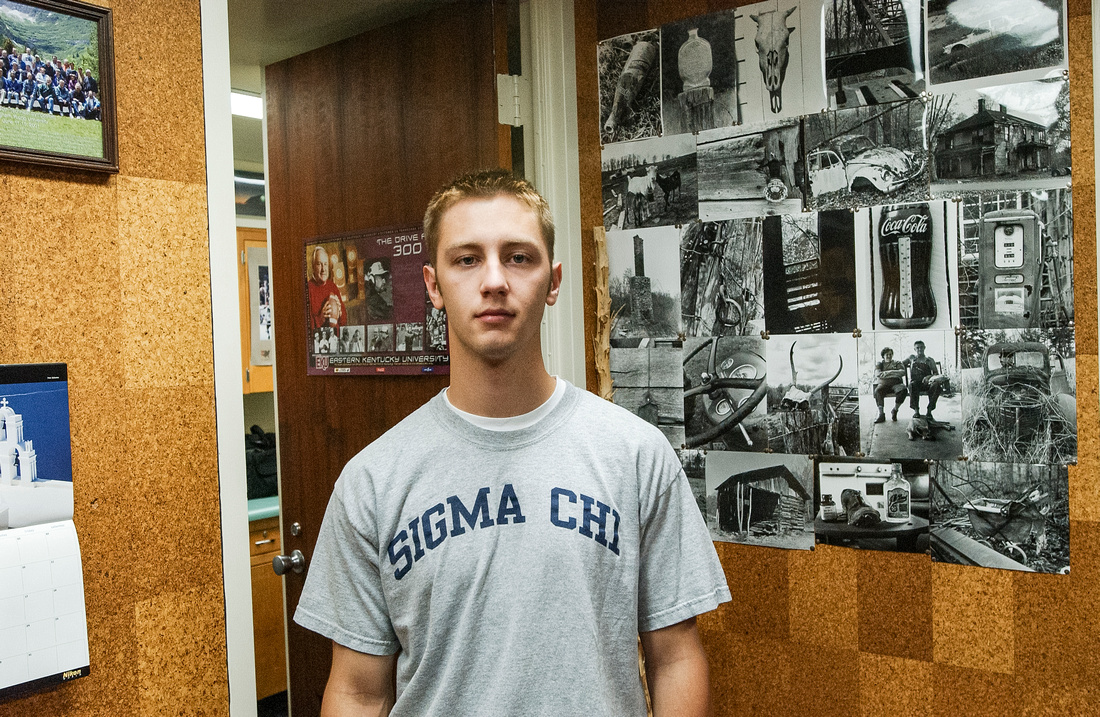 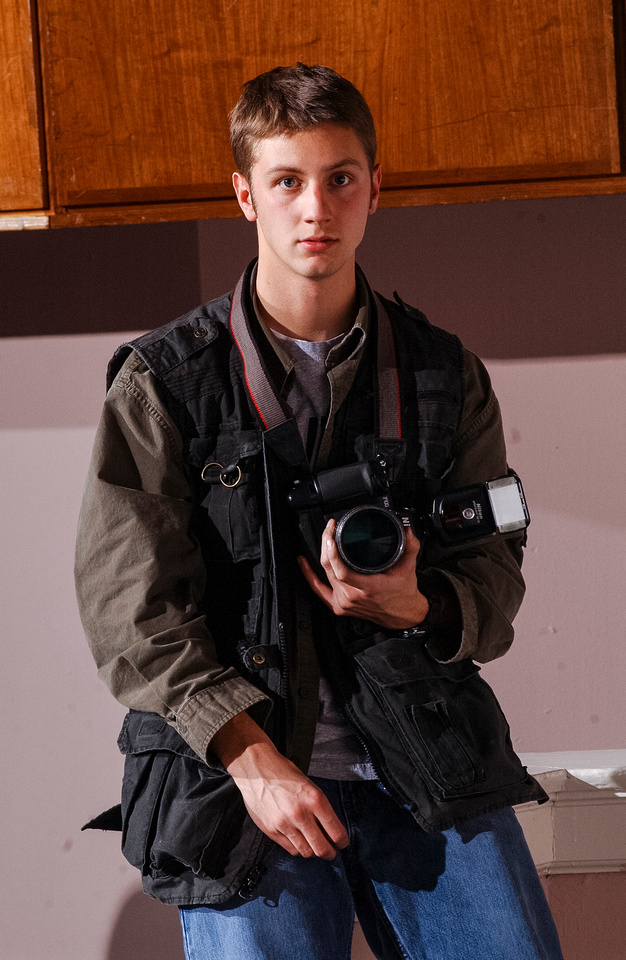 Natalie always wanted to bottle Chris up and keep him for our daughter Laura, who was a newborn at the time! 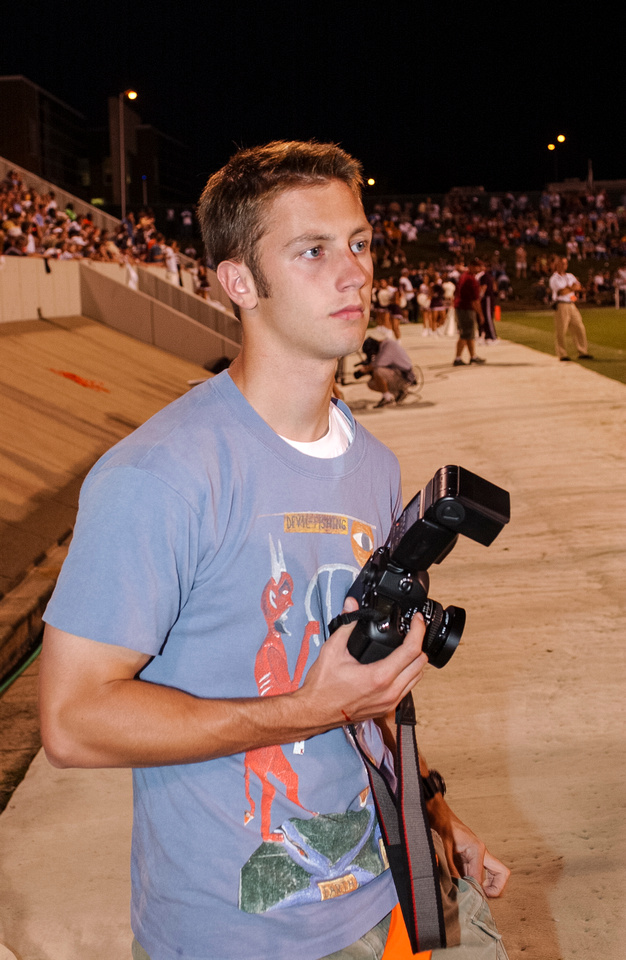 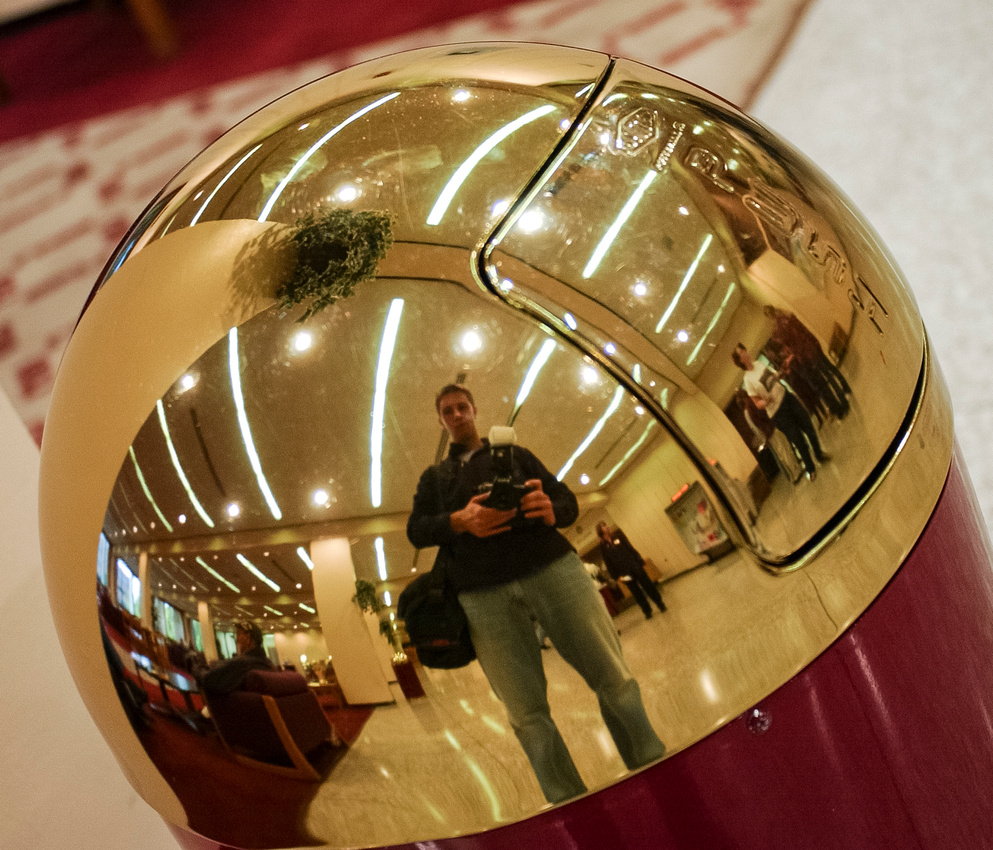 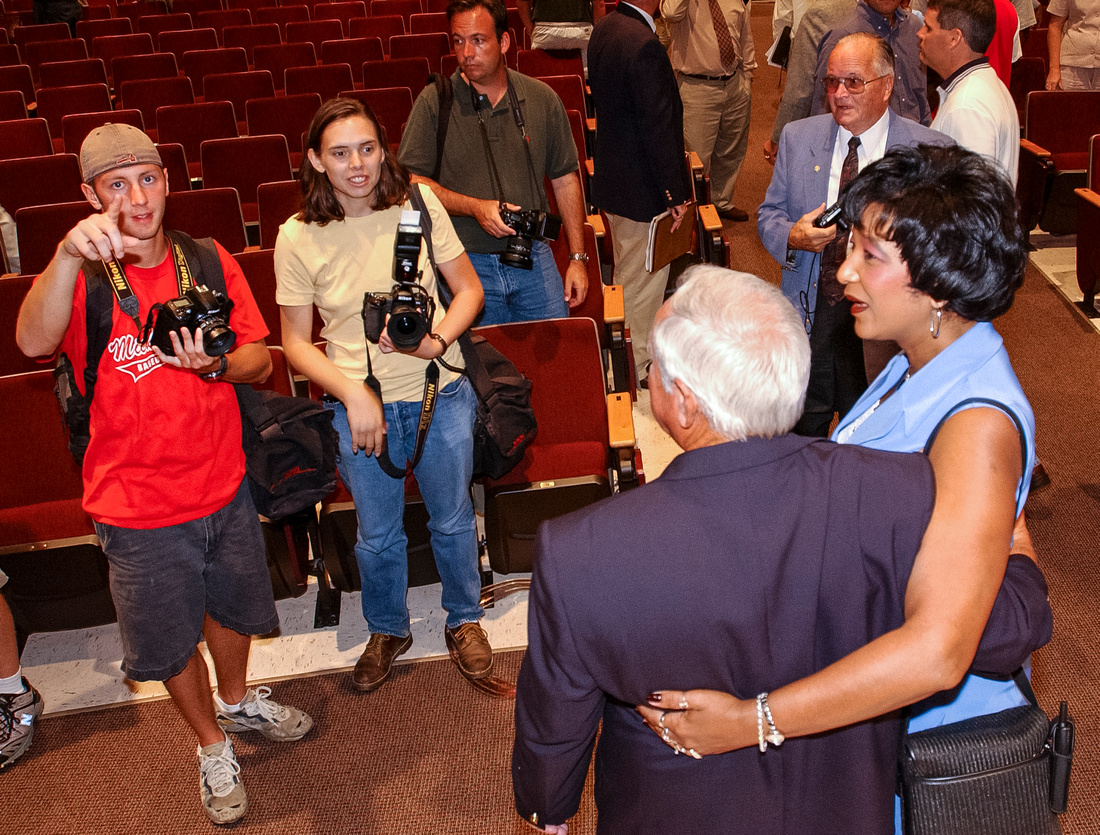 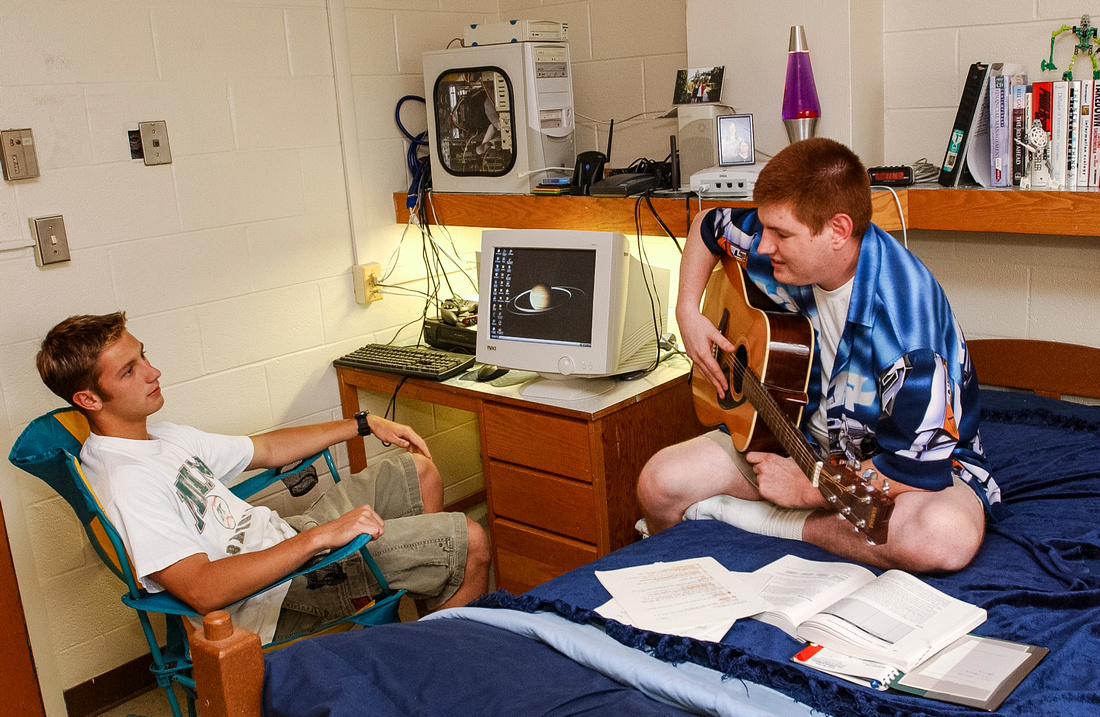 Sometimes I could con Chris into being a model for stock photos. 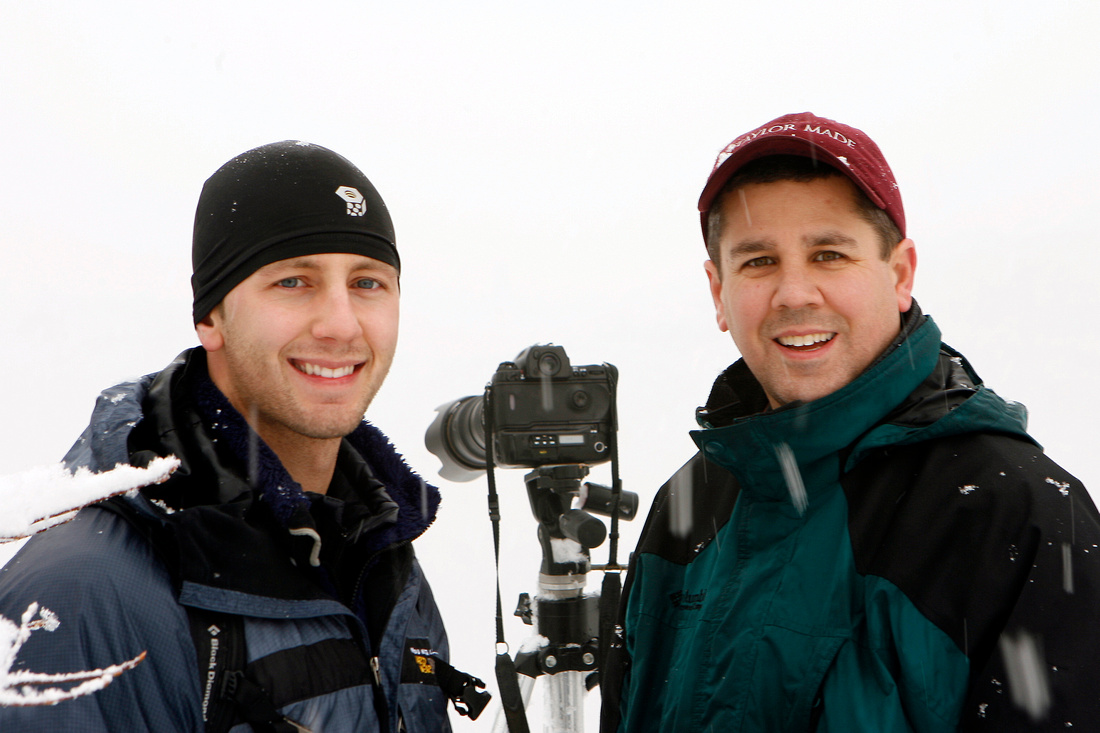 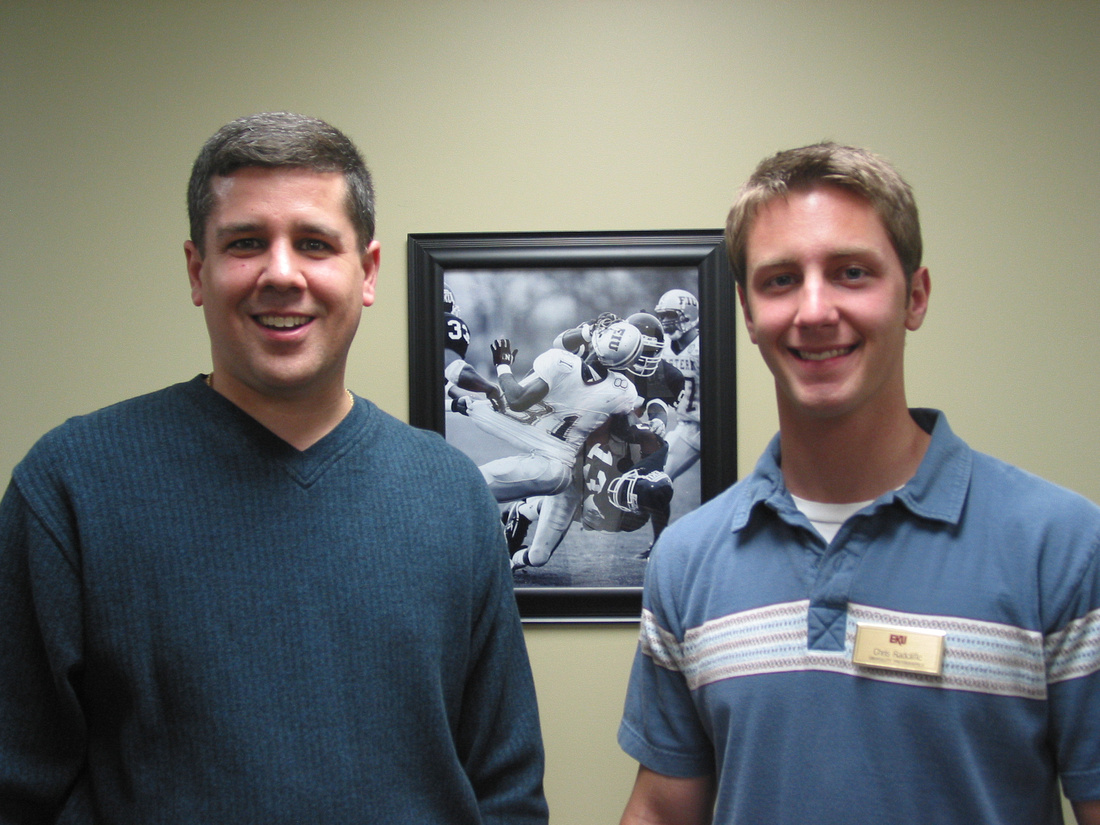 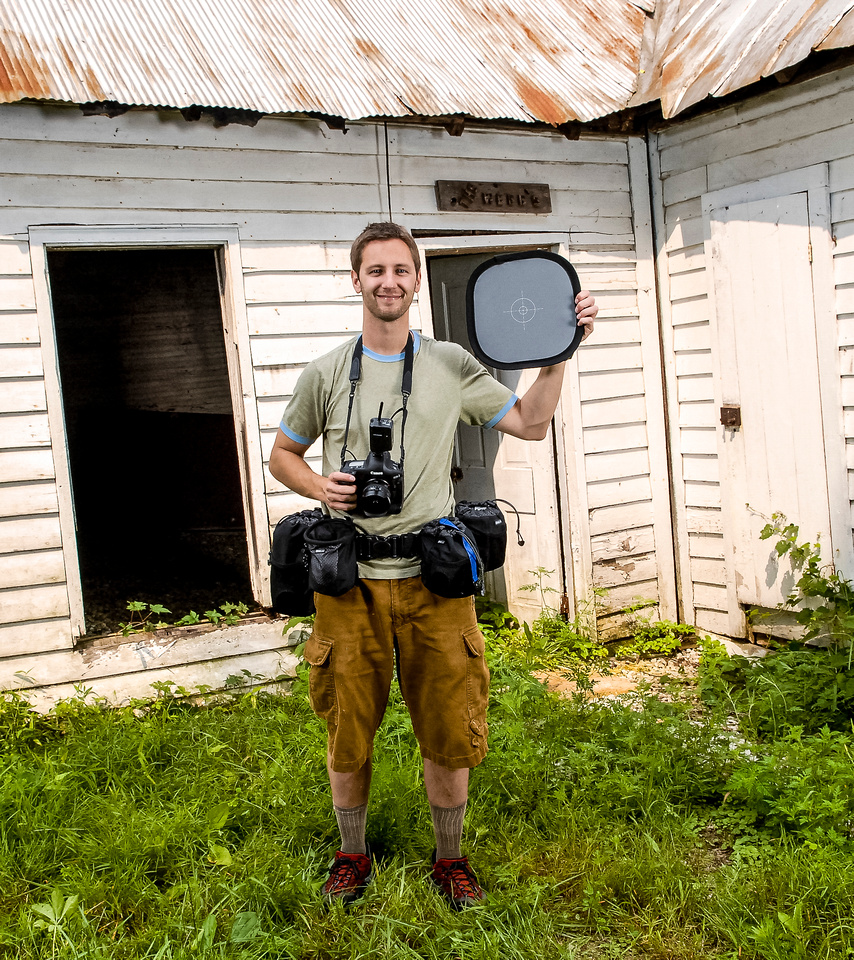 Even after I left EKU and moved onto the freelance world, Chris and I continued to work together. We made several trips across Kentucky, including a couple of magazine assignments to the Red River Gorge, Wise, Virginia, and my family farm in Carter County, above. 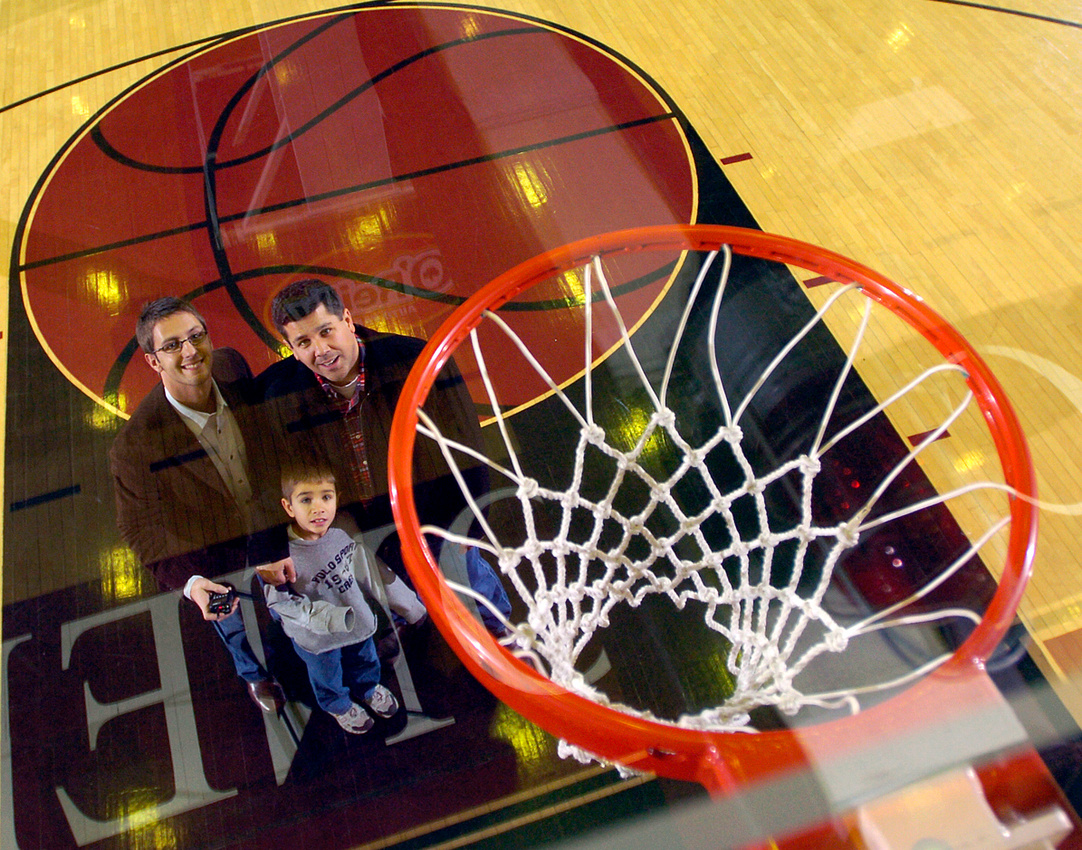 When Chris worked for me he and Nolan would argue over who actually owned a Sponge Bob Square Pants stuffed animal that I kept there for Nolan. A few years later Chris took this really cool remote-fired photo of all three of us with a camera mounted behind the basket in Alumni Coliseum. 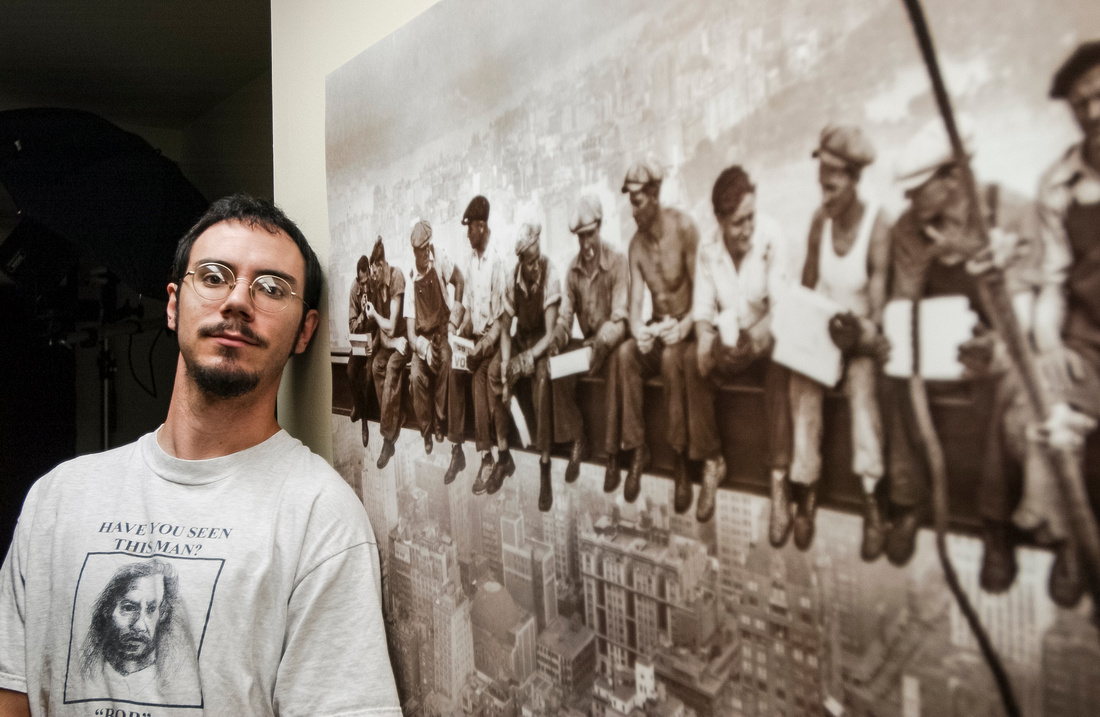 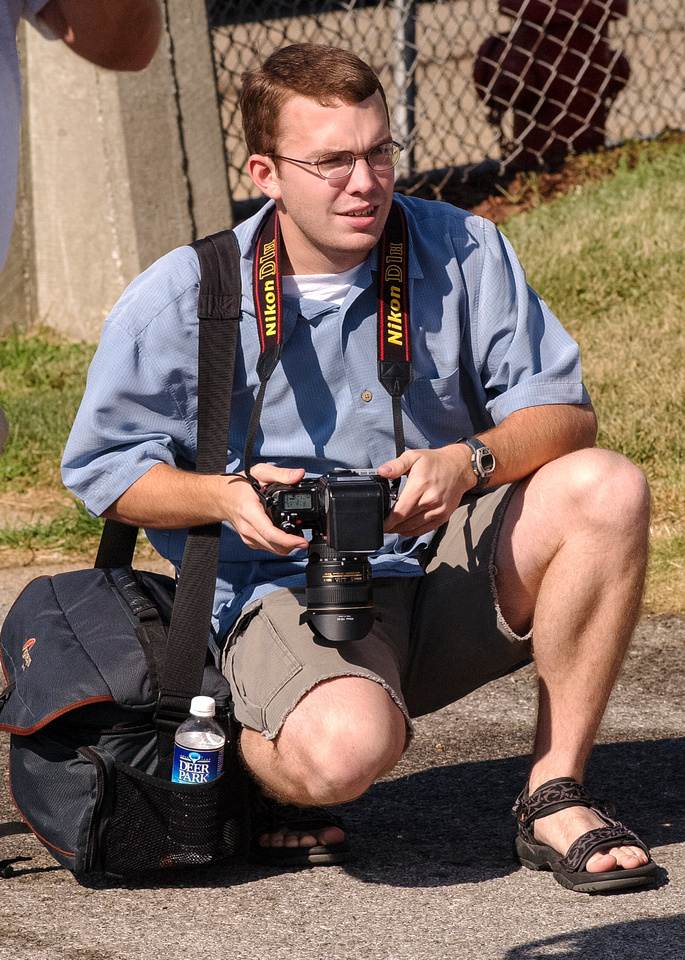 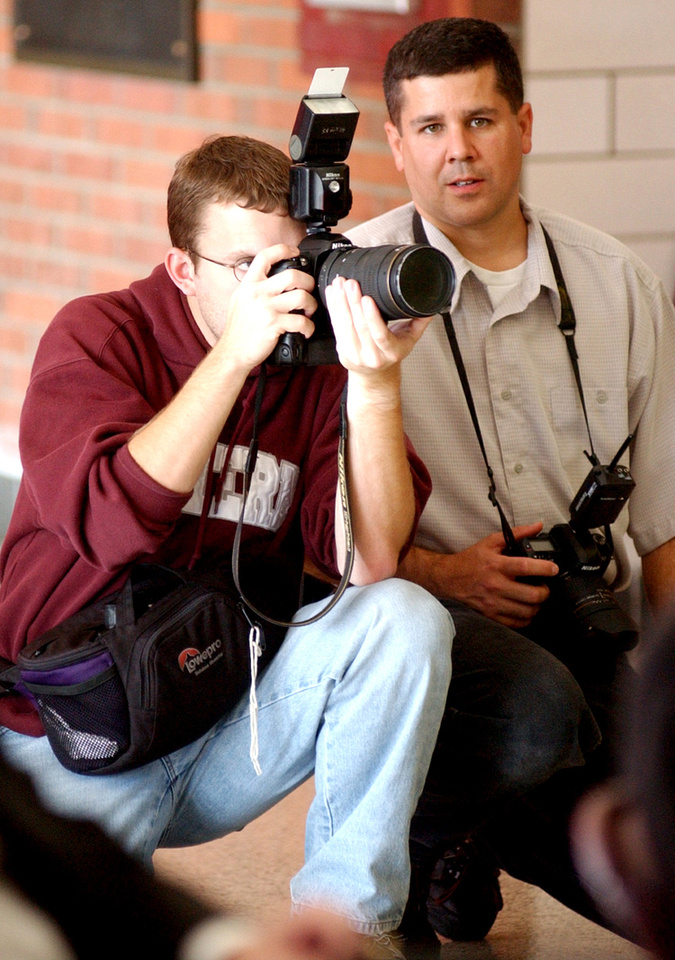 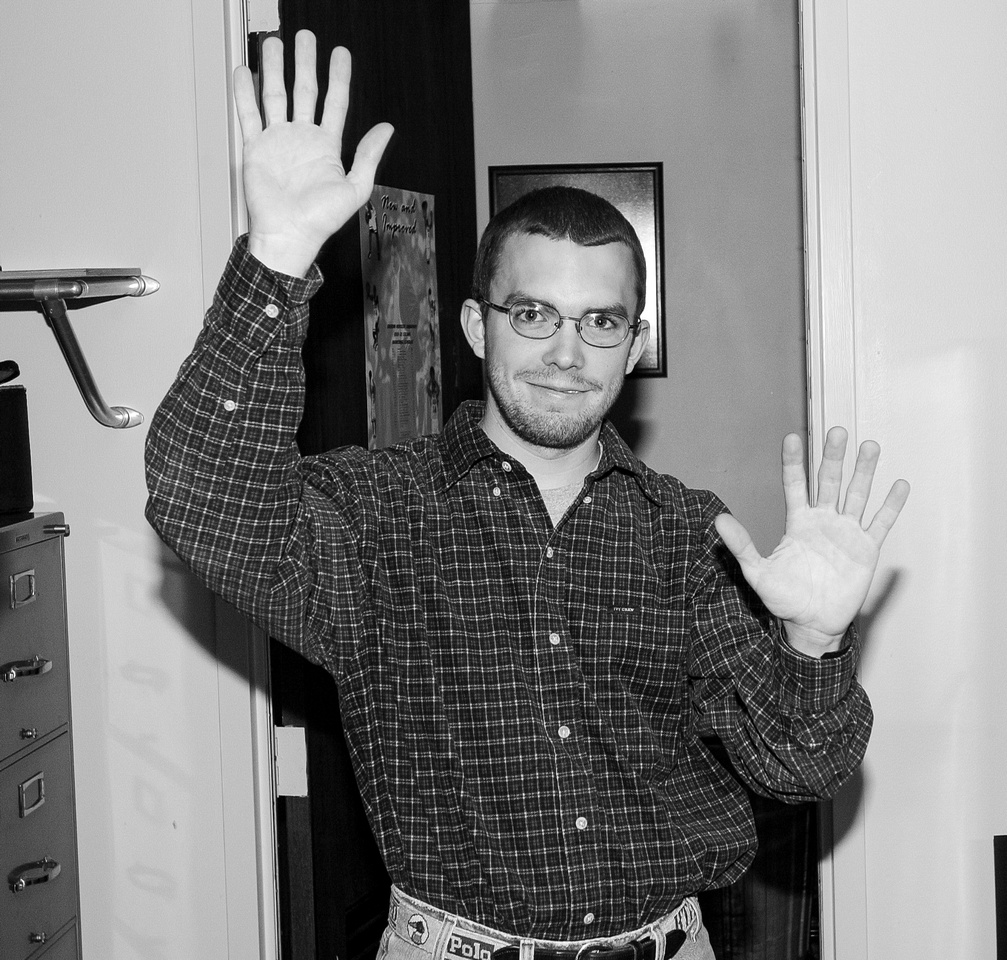 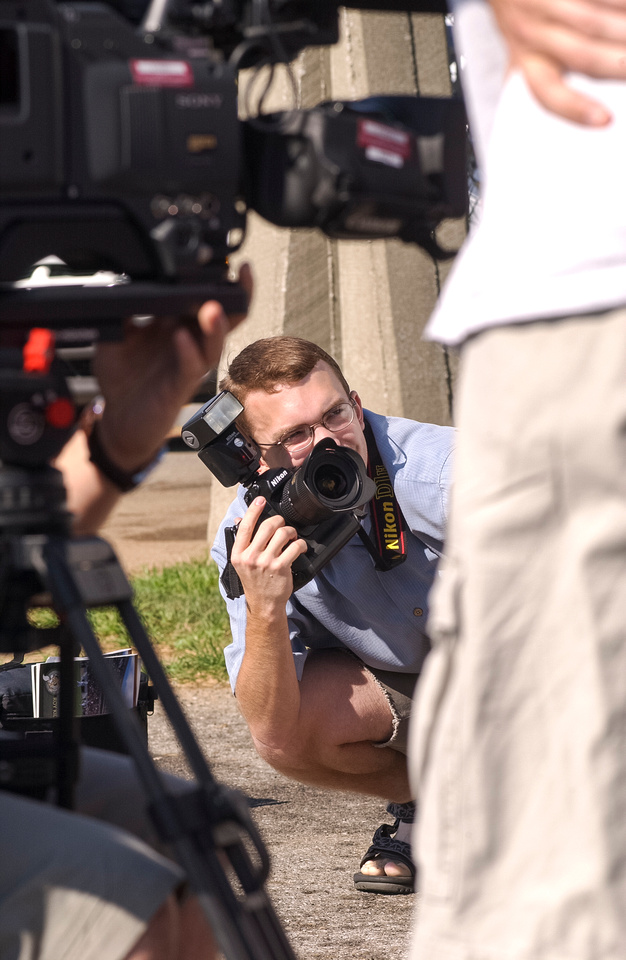 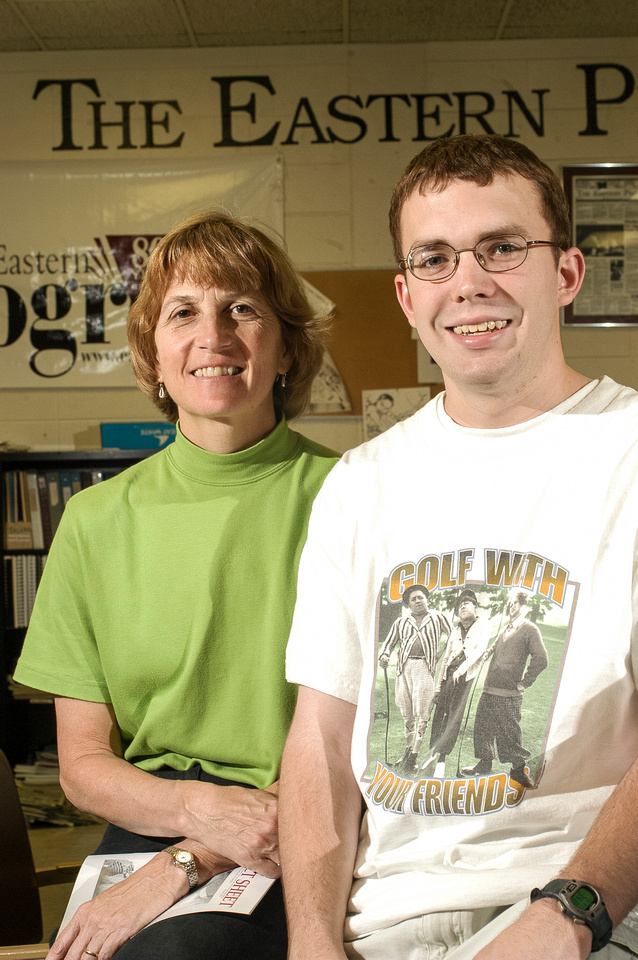 Kevin, seen here with Eastern Progress adviser Dr. Libby Fraas, in April 2003. This photo meant a lot to me because Doc, as everyone called her, was not only one of my former advisers, but she was also a good friend and my greatest mentor. She could be a real ball-buster when she needed to be. And believe me, if you were one of her editors and you missed deadline she would dock your pay in a heartbeat. And when you only made $45 a week, that really cut into your beer-budget for the week. Anyone of us who came out of The Eastern Progress was well prepared to work at any newspaper in the country thanks to Doc. This photo meant a lot to me because Kevin was attending from the "University of Doc" the same as I had 12 years earlier. 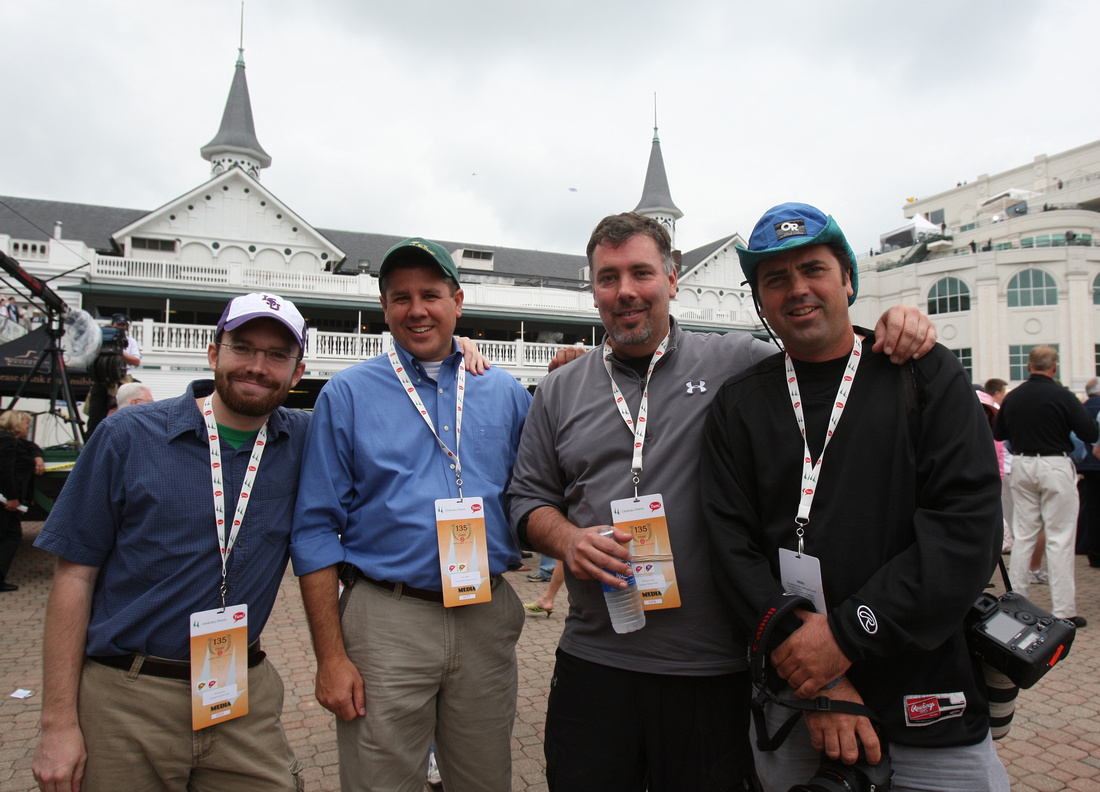 In May 2009 the four "Big Fishes" from Eastern Kentucky University and former photo editors of The Eastern Progress, Kevin Martin, myself, Mark Cornelison, and Rob Carr worked the Kentucky Derby together. (Never mind the fact that Corn has a spire growing out of his head!) 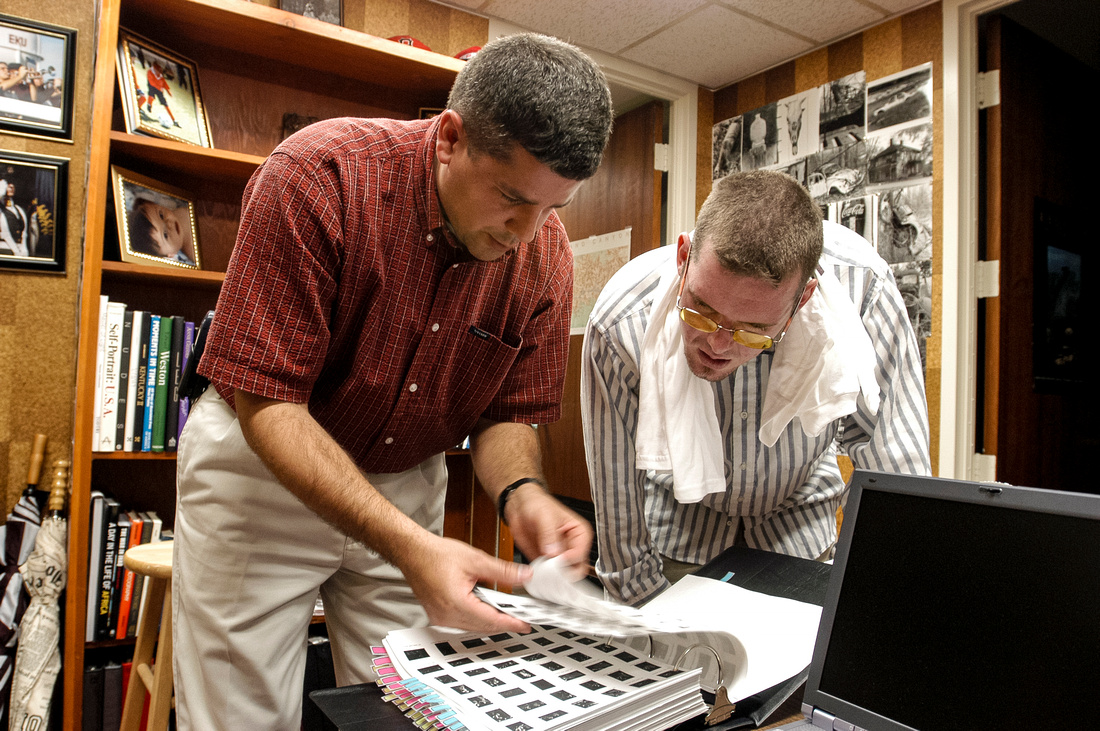 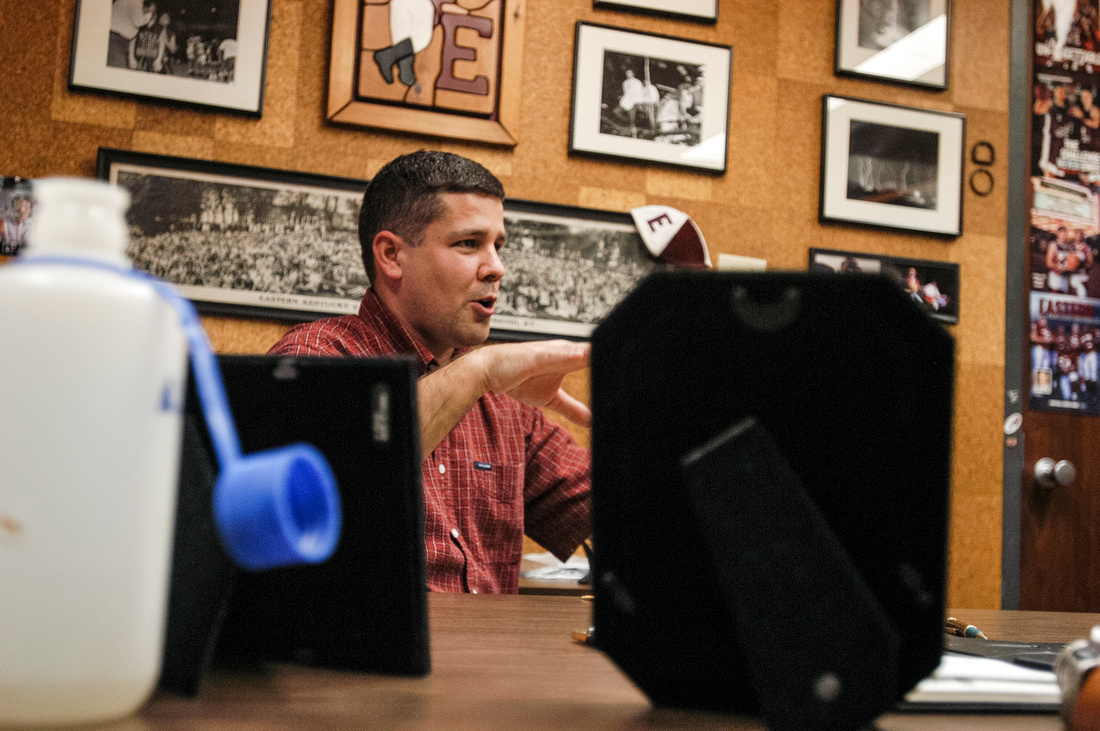 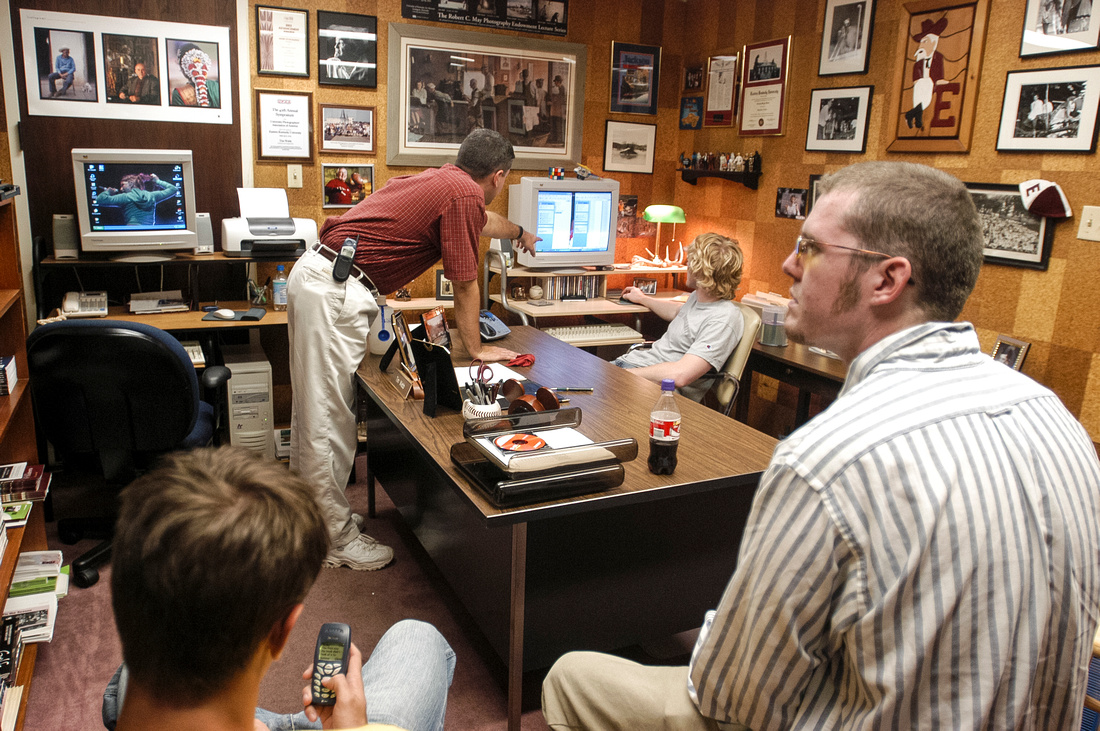 I held a rare staff meeting with my student photographers on October 21, 2003. Little did I know at the time, that three months later I would be turning over the reigns to Chris Radcliffe, who is seen in the bottom left corner with his Nokia phone. It's also interesting to see the evolution of my office decor over time. It was such a great office to work in each day!

Chuck posing with Amber Jones (Kennoy), who is now with WKYT Channel 27, for stock photos in the library, March 2003.