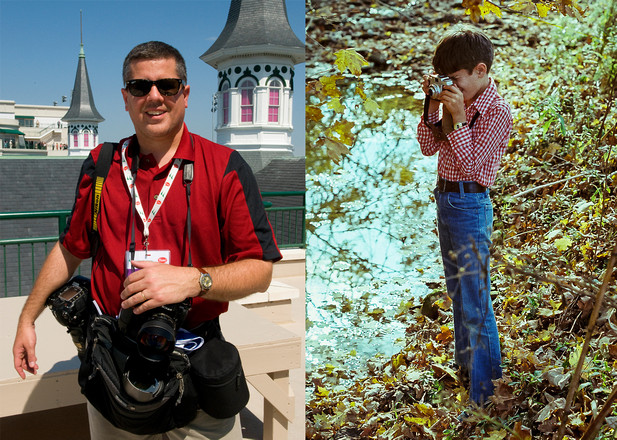 The photographic journey began for me in 1978 as a third grader at Clay City Elementary. My father set up a makeshift darkroom in our living room, and I was amazed as an 8x10 image magically appeared in the developer tray. Much of my childhood was spent with a camera around my neck, and that magic eventually evolved into a career and a passion.

After working on my high school newspaper and yearbook my senior year in 1988, I went on to work several years in newspapers, after receiving a journalism degree in 1992 from Eastern Kentucky University. I returned to my alma mater as the University Photographer in 1994. During that time, I generated thousands of photographs for the university's publications, including the alumni magazine, the admissions viewbook, the university's news service, athletic media guides and posters.

It was at Eastern that I first entered the digital age on August 3, 2001, after 23 years of working with film and the chemical process.

In 2004, I left higher education to pursue my own photography business, traveling as a corporate and editorial freelancer. My portfolio includes a variety of local and national magazines, along with corporations ranging from electric utility, to healthcare, to manufacturing and retail, to education, and athletics.

In addition to my full time schedule with Tim Webb Photography, I have served on a variety of boards including the Richmond Area Arts Council, The Eastern Progress, and the University Photographers Association of America, where I edited Contact Sheet, the organization’s quarterly journal. I have also served as a guest lecturer for Eastern Kentucky University, teaching photojournalism and community education photography classes, as well as serving as the photo coach for the student photographers at Berea College. I served as the official photographer for the Kentucky High School Athletic Association from 2011-2017, and for the All-A Classic Basketball Tournament from 2004-2015. I covered the Kentucky Derby for the Louisville Courier-Journal from 2005 to 2014.

In December 2015, I was chosen to be Kentucky Governor Matt Bevin's personal photographer for his inauguration ceremony, and I also worked on Governor Andy Beshear's inauguration in 2019. In 2016, I was part of a team from East Kentucky Power that won a national award for the best electric co-op annual report by the National Rural Electric Cooperative Association. In 2017, I was awarded Best of Show for my time-exposed photo of East Kentucky Power's Cooper Station Power Plant in Burnside, by the Cooperative Communicators of America. I won the same national best of show award again in 2021 with my Curly Horses in Winter photo.

My wife Natalie and I have lived in Richmond for 27 years, with our three kids, Nolan, 24, Cameron, 21, and Laura, 19, after living the first part of our lives in Powell County.